Ambitious Repertoire against the Catalan


Ambitious Repertoire against the Catalan 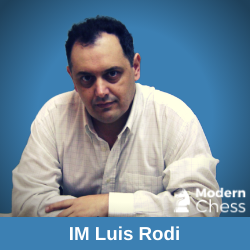 In his first database for Modern Chess, IM Luis Rodi provides an ambitious repertoire against the Catalan. The repertoire starts with 1.d4 d5 2.c4 e6 3.Nf3 Nf6 4.g3 Bb4+ (the authors also deals with the systems in which White delays Nf3 or c2-c4). The theoretical approach of IM Rodi is based on an in-depth analysis of positions with many pieces on the board and mutual chances. The author tends to favour aggressive ideas. Nevertheless, all his lines are completely justified from a positional point of view.

After this move, planning the fianchetto of the light-squared bishop, we have reached the starting position of the Catalan Opening. This opening is not only considered to be a very solid choice by White but, thanks to rather recent developments from this century, also full of dynamic and original ideas. According to my database, the first game with this position is Prokes - Wagner, London ol 1927. Among the first defenders of this idea, we can find masters like Vladimir Alatorzev, Karel Opocensky, Salo Flohr and Reuben Fine. The name of the opening originates from the Barcelona tournament of 1929, when a special prize was given to the player who introduced a new opening, which then would be named the Catalan. The combination of Queens Gambit and hypermodern fianchetto opening won the votes of the jury, and the prize went to Savielly Tartakower. Since these times, many great players contributed to the development of his system, for instance, in the seventies and eighties of the previous century, Oleg Romanishin created highly dynamic ways to play for White, involving many interesting pawn sacrifices. Later Vladimir Kramnik played the Catalan very successfully and introduced new and important ideas for both sides. Today, most elite players have the Catalan in their repertoire. But it's not just the elite, the opening also had a huge surge in popularity among amateurs thanks to two excellent books written by Boris Avrukh and Viktor Bologan and the wonderful trilogy of GM Mihail Marin for Modern Chess
4...Bb4

This is the starting position of our database

This check, played first in Broder - Tartakower, Ljubljana 1938, is very useful. Black's goal is to disturb the coordination of White's pieces on the queenside. The move is a frequent choice of top players like Magnus Carlsen, Fabiano Caruana and many more.

The move 5.Nd2 can be met the same way as 5.Nc3. Our main line is 5...dxc4 followed by ...b7-b5. The arising positions are very sharp, White has some compensation for the sacrificing material, but for not more than equality.

This position will be analyzed in Chapters 3 to 10.
The main line continues 6.Bg2 0-0 7.Bg2. In this chapter, the author deals with the alternatives for White on the 6th and 7th move.

IM Rodi suggests 7...Nd7 instead of the most popular 7...c6.
In the position on the diagram White's main reply is 8.Qc2, but in this chapter the author analyzes the rare moves 8.b4 (tried by Wesley So), 8.Na3 (Aronian's move), 8.c5 (Gelfand's favourite)
All those moves are less dangerous but deserve attention.

8. Qb3 deserves its own space, as it is the second most popular idea in this position. American prodigy Hikaru Nakamura, as well as classic players like Ulf Andersson and Ljubomir Ljubojevic, played this way, avoiding the theoretical main lines. Black has at least two good replies in 8...Nb6 and 8...c6.

The dynamic approach 8...Ne4 is our repertoire. In this chapter the author analyzed the main alternative to the main line (9.Bf4) 9.Nc3 allowing to exchange on d2, when after 9...Nxd2 10.Nxd2 White tries to gain central control by means of the e2-e4 advance as compensation for the loss of his bishop pair. Chapter 6 analyses this and other less common ideas for White on the 9th move, including the popular 9.Rd1.

After 9...c6  we reach the basic position for our development scheme. We can arrive here by using various move-orders, although each of them involves a series of independent sublines.

In this chapter, the author analyzes 10.Nbd2. This simple way of developing does not cause Black any troubles. He can immediately grab the initiative with 10...g5! 11.Be3 Nd6.

The move 10.Nfd2 is an idea recommended by grandmaster Boris Avrukh in his excellent repertoire series with 1.d4. Rodi thinks that Black has equal play with the reply 10...g5!? and if 11.Be3 the manoeuvre 11...Nd6 with the idea ...Nf5 works well.

This active development move is the most popular in this position.

Our main line continues 10...g5 - an energetic move and Mikhail Botvinnik's idea. The great champion chose it in his match against Tigran Petrosian (1963, ninth game). This background and the extraordinary game Eljanov - Carlsen, Wijk aan Zee 2016, inspired the author to include the line in his repertoire. In this chapter, Rodi analyzes 11.Be3 which was the move chosen by GM Pavel Eljanov in the abovementioned game. The less common 11.Bd2 is dealt with as well. True to his approach to the position, Rodi believes that after 11...Nd6 12.b3 Nf5 Black is doing fairly well.

11.Bc1 is Petrosian's choice and the most popular move in the position.
After this advance, Black gets an active position in Stonewall style. At first glance, the difference from the original Dutch opening seems to be in Black's favour, who is a few tempi ahead. This gives him a strong grip on e4 and the positional basis for a quick expansion on the kingside. Meanwhile, White also has his standard ideas: His control of the e5-square, the presence of a bad bishop in Black's camp, and he can hope to exploit the weaknesses created by the advance of the black kingside pawns. To summarize, it's a complex and strategically rich position with chances for both sides.

In this and the next chapter, we will see White using other move-orders that he has at his disposal. While they are not dangerous for the second player, sometimes they lead to situations where our previous suggestions are being sidestepped. In that case, here comes our plan B.
In the position on the diagram above Black can't play 5...dxc4?? because of 6.Qa4 and White is winning a piece.
Author's recommendation is 5...0-0 after which White can choose between 6.a3, 6.Qc2 or 6.Nf3. All those lines are not that dangerous and Black keeps the balance with ease.

White delays the advance c2-c4. This move-order is used to avoid the lines with a quick...dxc4 and, of course, also our main recommendation with the check on b4. Of course, delaying c2-c4 has some important drawbacks. The main one can be explained by the fact that with his last move, White allows 4...b5.
White has 10 different options at move 5, but Black is doing fine after all of them

The database ends with 24 interactive test positions. Below, you can find 5 of them.