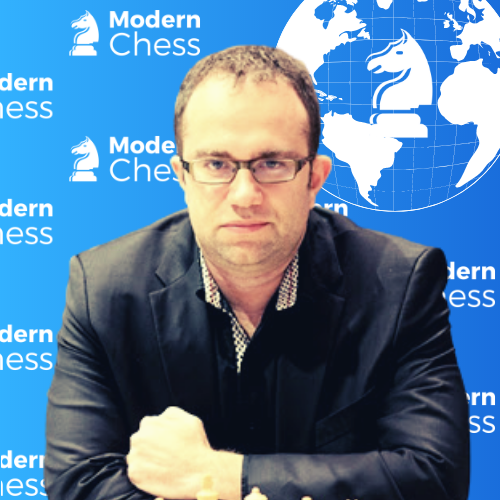 Nowadays, it is getting extremely difficult to find fresh ideas in the opening. When you play White, it is not easy at all to even create some practical problems for your opponent.

This flexible move is often quite annoying for the fans of King's Indian and Gruenfeld. Besides preparing the advance e2-e4, White is ready to restrict Black's dark-squared bishop by means of c2-c3. This approach has a huge practical value. Instead of delving into endless theoretical debates, White is heading for less explored positions when most likely he will be more experienced than his opponent. An additional advantage of this system is that it can be used even against the Pirc Defence.

In the introduction to the current database, GM Eljanov writes: As a long-term proponent of closed openings with White, I can say that the Gruenfeld Defense has always been a serious headache. The opening where Black counterattacks from the first moves has always been a stumbling block since it requires precise and deep preparation. Therefore, it is not surprising that the players who play with White sometimes choose less principled but not so forced paths. One of these is undoubtedly the move 3. Nbd2, which leads away from the big theory but makes it possible to play less studied positions with deep strategic ideas. White would like to push 4.e4, while keeping his centre less exposed than in the sharp main lines of the Gruenfeld. Naturally, against such a relatively modest move, Black has a large choice of different concepts and methods of fighting for the centre and we will discuss them in this opening database.

The database consists of 8 theoretical chapters and 15 interactive test positions. Below, we shall make an overview of the different chapters.

This rare and provocative move deserves attention because it is an attempt by Black to avoid 5.Bb5+ (discussed in Chapter 4). The principled reply is 5.e5.

Advancing the e-pawn without proper development carries its risks as the pawns can become exposed to counterattack, but White has good resources to fight for an initiative with this move. For example, the move 5...Ne8 is well met by 6.h4! with a dangerous attack. Paradoxically, Black's best option is 5...Nh5. Practically speaking, however, it is difficult to play this position with Black. A lot of precision is required in order to maintain the balance.

Actually, 5.Bd3 is not Eljanov's repertoire suggestion. Nevertheless, only after understanding the disadvantages of this move, you will realize the point behind 5.Bb5+ which will be dealt with in Chapter 4. Additionally, this chapter will allow you to get a better understanding of the typical pawn structures.

This is the most natural and active way to develop the knight since we are ready to attack d4-pawn with 7...e5 next. The point is that the d4-d5 advance does not look promising for White due to an awkward position of knight on d2. Even though the arising positions are practically complex, Black usually gets enough counterplay in this line.

This is a markedly different approach compared to the one discussed in Chapter 2. Black attacks the white centre with the c- instead of the e-pawn, trying to clear the long diagonal for his dark-squared bishop.

This move is probably better than the most common 8...Nc6. After 9.d5, we will get a typical KID pawn structure. In such a case, having a knight on d2 can be an advantage. Very often, White manages to put pressure on d6 by means of Nc4 followed by a2-a4, b2-b3, and Ba3. Eljanov analyzes the arising positions in great detail. His conclusion is that White is slightly better.

This is the most challenging option for Black. White's idea is to disrupt the opponent's most active setup with Nc6 and e5.

Since the c6-square is no longer available for the knight, Black should prepare ...e7-e5 with ...Nbd7. As you are going to witness on a number of occasions, with a pawn on c6, the structures arising after dxe5 ...dxe5 are favourable for White. In his analysis, Eljanov shows how exactly we should increase the pressure in such symmetrical positions.

This is a logical attempt to undermine the white centre, which might particularly appeal to black players who like to play the Hedgehog setup.

At this point, White needs to make an important choice. The two main setups at his disposal are the g3-fianchetto or to develop the bishop to e2/d3 after e3. While all the approaches are playable, Eljanov usually prefers to put the bishop on e2. From a practical perspective, however, having all the options in your repertoire will be very useful. Usually, White's play is slightly easier in all these systems.

This classical way of meeting 3.Nbd2 is the critical variation from a theoretical point of view, posing White the most problems to fight for an advantage. e2-e4 is not an option any more, so White typically turns to the queenside play with b2-b4, simultaneously stopping Black's ...c5 break. However, the move orders also matter and White can choose whether to start with 4.b4 or 4.e3, as well as when to push c2-c4. This chapter deals with the subtleties related to the different move orders.