The fianchetto variation against King's Indian Defence and Grunfeld is very popular at all levels. It is considered to be the safest way to play with White.
Loyal to his style, GM Roiz builds a repertoire which is not based on the most popular continuations. He provides a variety of new ideas in many important positions. Furthermore, his work brings new life to old forgotten lines.

The first database is dedicated to the Grunfeld Defence. The database consists of 12 theoretical chapters and 15 test positions.

This is only White's 7th choice, according to statistics, but Roiz finds it very challenging. White deviates from releasing the tension and intents to claim his superiority in the centre since now the c6-pawn is pinned. This move was employed by many top players, including Magnus Carlsen.

The database starts with an examination of the rare options for Black on move 5.
This chapter is mostly dedicated to the move 5...e6.

Black's last move is not really in the spirit of the Grünfeld as now the c8-bishop is locked, so Black's counter-attacking abilities are limited. However, it still offers Black solid play similar to the Catalan.
White can simply continue with Bg2, 0-0, Rd1. The only nuance is that at the moment when Black plays Nbd7, White should retreat his queen to the c2-square in order to avoid ...Nb6. Black’s position remains solid but very passive in all the lines.
5…Nbd7 is forcing White to release the tension in the centre with 6.cxd5 Nb6 7.Qb3 cxd5.

However, in this line the knight on b6 is misplaced and White has an initiative in this symmetrical position. 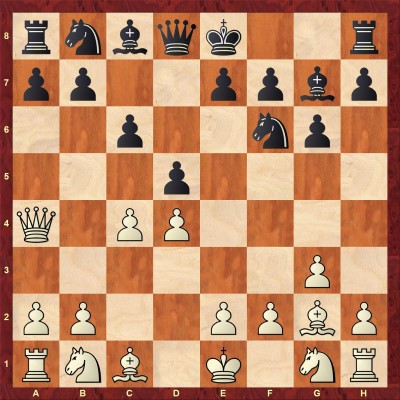 By making this move Black accepts the inferior pawn structure, but his lead in development partly compensates for it.
White should continue with 6.cxd5 and then Black is on a crossroad between 6…Nxd5 and the pawn sacrifice 6…0-0.
After 6…Nxd5, the game usually continues 7.Nf3 Nb6 and then GM Roiz suggests the rare 8.Qa3. It seems that White can claim a slight edge in all variations.
After 6…0-0, White should not accept the sacrifice but continue with 7.e4! cxd5 8.e5 with a slightly better position.

A tricky move but quite a typical idea for the Grunfeld Defence. In comparison to the somewhat more natural 5...Nbd7, the queen's knight could go to c6, whereas the g7-bishop is unlocked now. The main line continues 6.cxd5 Nb6 7.Qd1 cxd5 8.e3!?
GM Roiz analyzed this position in details and explained all the strategical ideas. His analysis proves that White can keep the small advantage in this symmetrical structure.

This move is aimed to provoke c4xd5 so that Black's knight could go to c6. The drawback of this idea is similar to the Chebanenko Slav as the b7-b5 advance would create some weaknesses on the queenside. As always in this variation, White can hope for a small edge.

5…dxc4 is a very logical reply. Black is playing in a typical Grunfeld style by giving up the centre, but planning to compensate this with an active piece play. The other plus of this variation is that Black is avoiding the symmetrical pawn structure.

This position was reached in many GM games. As the practice and analysis prove, Black does not have enough piece play to compensate for the lack of space.

This is a very popular setup for Black. The main line continues 9.Nc3 Nbd7 and in this position, Roiz suggests a very rare move 10.h3. A useful move which invites Black to show his cards. White secures e3 for the bishop and also acquires the resource g3-g4 that might diminish Black's control of e4. The author analyzes the arising position quite deeply and suggests many novelties and new concepts.

By playing the immediate ...d7-d5, Black is going for a more dynamic approach to the position. Later on, he will be trying to challenge White's centre by means of ...e7-e5 or ...c7-c5.

In this position, Black has different move orders at his disposal. He should decide whether to play ...Nc6, ...0-0 and ...e7-e5 at once or make the preparatory ...Nb6. The move ...Nb6 can be made before or after the castle but usually before ...Nc6. The idea is to put pressure on d4, thus preventing White from playing e2-e4. Of course, very often, these moves lead to a transposition.

Black can also attack the centre with ...c7-c5, before or after castling. This idea is dealt with at the end of the database. 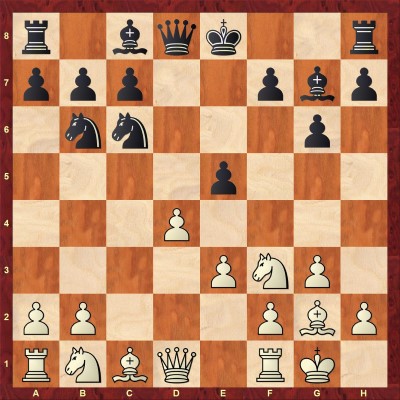 An interesting try for Black. He is attacking the centre, without wasting time for castling
We reach the main tabiya for the variation after the moves 9.Nc3 exd4 10.exd4 0-0 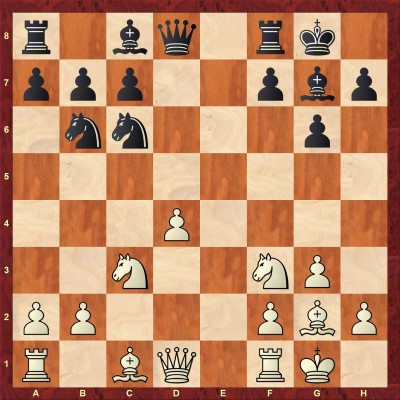 Black's position looks fine: the isolated d4-pawn is vulnerable whereas Black has all the chances to take control of d5.
At this point, Roiz suggests 11.Bg5! - White should play quite energetically in order to create some threats.
In this position, the author analyzes 11…Qd7, 11…Qd6 and 11…f6 and proves that White’s initiative overwhelms his worse pawn structure.

This way of handling the position recently became quite popular on the high level.
Black provokes White’s pawns to move forward. It turns out that natural 8.Nc3 is not giving an advantage after 8…e5!
Instead, White should continue 8.e4 Nb6 9.d5 Na5. 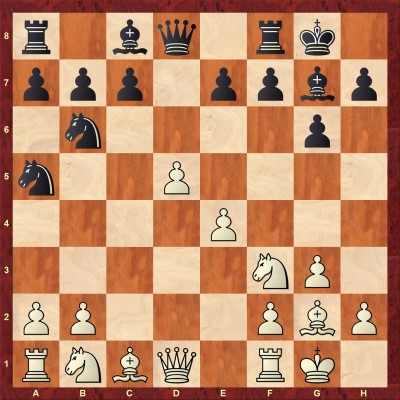 This is the main tabiya of the line.
White takes the upper hand in the centre, but Black's dark-squared bishop is getting very strong. The knight on a5 is not as bad as it looks. In such positions, Black mostly manages to relocate it to c4.
The author suggests an interesting idea 10.Qe1!? This somewhat unusual move needs an explanation - White invites Black to solve the problem of the bad a5-knight. It turns out that this is the only way of fighting against ...c7-c6.
The position is examined in details and the author discovers some interesting novelties.
It turns out that Black’s task is not so easy in this line. 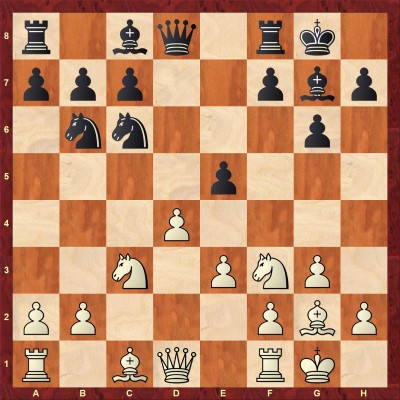 This is the old main line in Fianchetto Grunfeld. It is Black's most obvious attempt to solve his space problems. This position was first seen in 1938 and since then it was tested on the highest level.
After the natural 10.d5 Na5 GM Roiz suggest to avoid the absolute main line 11.e4, but to play the rare 11.b3!
Curiously, this natural move took place only in a few high-level games so far. At the same time, it seems vital to delay the activation of the awkward knight on a5, even though it weakens the long diagonal. Of course, this is a completely new concept and the Israeli GM is offering many novelties in his analysis. Armed with the knowledge in this chapter, the reader should be confident in the following sharp middlegame battles.

This waiting move is known since the middle of the 60s. Since Black fails to immediately solve his space problems with the immediate 9...e5, he tried to make this advance more effective. Quite soon, it became the main attempt to reach equality.
The author suggests 10.h3 – again not the most popular move, but quite an interesting try. White also makes a useful and waiting for Black to show his hands. Roiz analyzes 6 different replies for Black but neither of them equalizes completely. 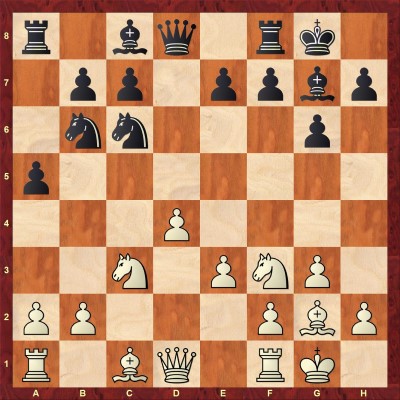 This move was first seen in 1946, but it gained popularity mainly in the last 5-6 years. The main idea behind it is to make it difficult for White to put his dark-squared bishop on b2. GM Roiz suggests 10.Qe2 with the idea Rd1 followed by pushing the pawns in the centre. Black has a choice now: to strike in the centre immediately with 10…e5 or to delay ...e7-e5 by playing 10…a4 or 10…Be6.
All 3 moves are analyzed carefully by Roiz and it seems that White can retain the small edge in all lines. 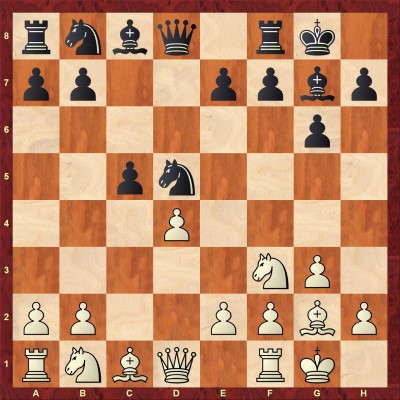 Attacking the centre with 7…c5 looks like a logical idea, but as GM Roiz shows, after the ambitious 8.e4 Nf6 9.e5! White has an edge in all lines.

At the end of the database, you are provided with 15 interactive test positions which are designed to check your knowledge and understanding of the theoretical part.