The Secrets of the Practical Endings

Quite often in tournament games, we reach an ending with many pieces on the board, one that has no exact evaluation. It might be approximately equal or with some advantage for one side, but everything will depend on future actions and creativity of the players. Generally, knowledge of theoretical endgame positions is always a useful asset, as even complex endings might be reduced to such positions in a certain moment. But first in order to reach that moment and everything to be in our favour, we must learn how to built advantages little by little, how to pose problems for the opponent. So I shall concentrate on giving you inspiration and principles on how to play from the practical point of view in a complex ending, as theoretical ones are already covered in hundreds of books.
The main factors that determine our play in such positions are pretty much well known -
1) Pawn structure. Of course, if possible, we should not have any weaknesses and always try to create and attack such in opponent's camp. Also, in endgames space advantage sometimes is a crucial thing - not only for the space of maneuvering typical for middlegame but also because our pawns are closer to a possible promotion.
2) Piece activity and initiative. In complex endings with pawns on both sides and many pieces on the board, this factor also is almost as important as in the middlegame.
3) King's activity. Often serving as an extra piece in endgames, but one must not forget that because of its greater exposure, the King might become a target for various tactics and also mating threats.
I. An ending I like
These days theory has developed so much, that many games from the opening go straight into an ending. But more often than not, these are not easy endgames, thus, it becomes more important to learn how to play them! Many young players when studying opening theory make the mistake of not having a look how the games go on at a later stage. And every opening has his own typical endings that arise, with their own positional ideas and even typical tactical motives. This why when learning let's say French defence, you should learn also typical French endings. It is not enough to know only the computer evaluation after move 20...

My game against GM Vladimir Lazarev features a typical ending that I like very much. 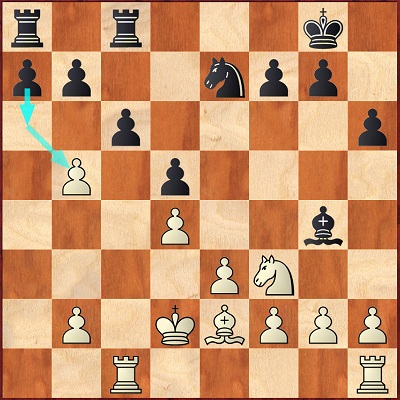