Sicilian Structures - Part 2. How to Fight for the Weak d5-Square

In the present issue of Modern Chess Magazine, we continue dealing with the typical Sicilian structure with a weak d5-square. In his last article, GM Viktor Gavrikov analyzed the positions in which White puts his knight on the weak d5-square and takes with a pawn in case of an exchange. The present material features structures in which White tries to occupy the weakened d5-square by a piece. In this structure, both sides are trying to control with as much pieces as possible the critical "d5" square. That's why the first thing that we should know is which piece to exchange and which piece to keep. There are 3 main scenarios which favour White:

1) White exchanges all minor pieces except his wonderful d5-knight. This plan works very well If Black has a dark squared bishop against the knight.

2) White enters a position with opposite coloured bishops and heavy pieces. In this case, he tries to combine his queenside initiative with threats against Black's king. Especially the f7-square is extremely vulnerable.

3) White exchanges all minor pieces and play endgame with major pieces remaining on the board. In such kind of endings, the weakness of d6-pawn is a significant factor. How should White fight for the d5-square in this case ? His usual plan is to exchange every opponent's piece which controls the d5-square. That's why the exchange of the light-squared bishops is almost always favorable for White. Moreover, under favorable circumstances, White will be trying to get rid of his dark-squared bishop which has nothing to do with the weakened central square. If it's possible, this bishop should be exchanged for a knight. On the diagram, we have a classical example in which the 7th World Champion Vassily Smyslov wins by following his main strategical goal to take control of the d5-square. 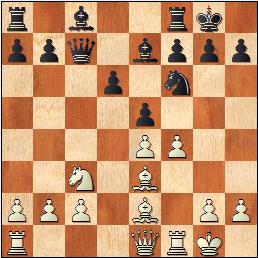