Dear Reader,
We are about to start dealing with one of the most important pawn structures - semi-hanging pawns. This is an isolated pawn couple c3 - d4 (c6-d5 for Black) which very often arises when in a position with an isolated queen's pawn (Issue 2, 3 and 4). there are is an exchange on "c3" ( "c6" respectively). Later on, if the backward c-pawn is advanced, we reach a position with hanging pawns ( see Issues 5 and 6). In this way, it is not difficult to see that all the pawn structures that were covered until now are interrelated.
The semi-hanging pawns will be covered in two articles. The current one features all the basic ideas we should know when playing against semi-hanging pawns while the next article will explain the ways in which we could use the potential of these pawns.
First of all, it will be useful to have some general understanding of positions with semi-hanging pawns. That's why I will try to explain their strong and weak points.
Obviously, the side playing with semi-hanging pawns enjoys a considerable spatial advantage ( it is also the case in positions with IQP and hanging pawns ). As the reader probably knows, the extra space gives us a room for manoeuvres as well as considerable chances to organize a kingside attack. Unlike the other structures we are familiar with ( IQP and hanging-pawns), in positions with semi-hanging pawns, our central pawn is protected. That is the reason why it's much easier to start an attack on the kingside - our pieces are not occupied with the defence of the d4 (d5)-pawn. Also, it's important to point out that when we play with semi-hanging pawns, we could always make use of the semi-opened e and b files. In the next article, we will focus on the typical ideas allowing us to develop a kingside attack.
Nevertheless, this pawn structure is far from perfect. It's most significant defect is the backward pawn on the c-file. This pawn is our main target when we play against semi-hanging pawns. Moreover, another important weakness is the a-pawn ( note that there are two pawn islands on the queenside). Also, it's important to point out that when playing against semi-hanging pawns, we should always aim for exchanges. In the final stage of the game, there are no attacking chances while the isolated pawn couple in the centre could be very weak.
The general structural background being clear, we can proceed with the methods of playing against the semi-hanging pawns. As I have already mentioned, we should try to build an attack against the backward pawn on the c-file. At the same time, it's extremely important to control the squares in front of the opponent's central pawns ( "c5" and "d4" or "c4" and "d5"). Otherwise, our opponent could enter a position with hanging pawns by advancing his c-pawn. We could enter a position with hanging pawns only when we are ahead in development. In general, it is always advantageous to block our opponent's semi-hanging pawns with a knight.

All the typical ideas in the fight against semi-hanging pawns are demonstrated in the classical game Rubinstein - Salwe played in 1908. You should always have this model game in mind when handling the positions with semi-hanging pawns. 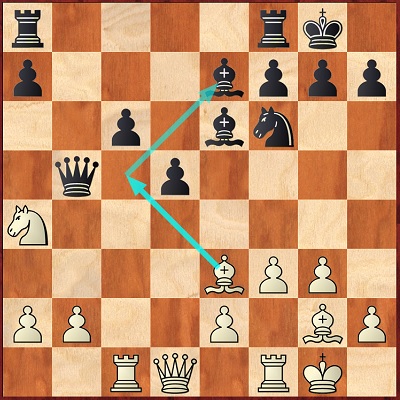 On the diagram, we have a position which is highly advantageous for White. White controls the important squares "c6" and "d5", while Black has no chances to organize an attack on the kingside.