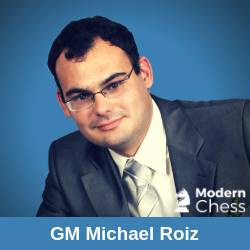 In the second database of his English series, GM Michael Roiz completes his repertoire after 1.c4 e5 2.g3. Contrary to Part 1, with rare exceptions, the current database features systems in which the play is more positional. Therefore, when studying this database, one should mostly concentrate on the understanding of the typical pawn structures and plans.

In what concerns the theory, true to his approach, GM Roiz always tries to come up with original and less explored concepts.

The database is structured in the following way:

Make sure to read this section before proceeding with the theoretical part of the database.

This typical structure arises in the line 1.c4 e5 2.g3 g6 3.d4 d6 4.dxe5. Positionally speaking, Black is perfectly fine. He has good control of the centre and all his pieces have good perspectives. A dream setup would be ...Nd7, ...c7-c6, ...Kc7, ...Bg7, ...f7-f5, ...e5-e4, ...Nf6, and ...Ne5. Therefore, White should play dynamically. In the concrete position, the most precise continuation would be 1.Bh3! In this structure, the light-squared bishop is White's most problematic piece. In a case of Bg2, Black can always restrict the bishop by means of ...c7-c6. Therefore, with his last move, White is trying to provoke an exchange, even at the price of a pawn sacrifice. A possible continuation would be 1...Bxc4 2.b3 Ba6 3.f4! Another energetic move which perfectly fits into the spirit of the position. 3...Nc6 4.Bb2! White is planning to continue with 0-0-0 followed by Nf3 and Nd5. It is difficult for Black to coordinate his pieces. 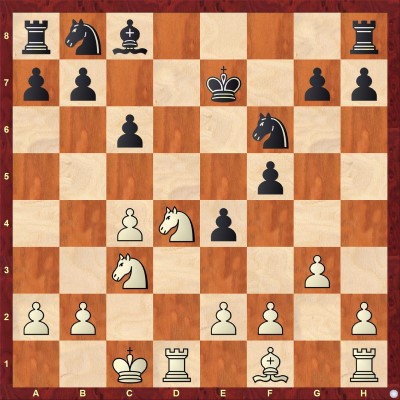 Compared to the previous position, Black has managed to further expand in the centre by means of ...e5-e4 followed by ...f7-f5. Once again, structurally speaking, Black is doing very well. With a king in the centre and development problems, however, the overextended centre may cause troubles. Of course, White should play energetically. In this position, the thematic reaction is 1.f3! destroying Black's centre. White is trying to provoke the move ...exf3. Being underdeveloped, Black cannot support his e4-pawn. A possible continuation would be 1...Na6 2.Bg2 exf3 3.exf3 with a huge positional advantage for White. In this structure, the f5-pawn turns out to be a huge problem for Black. The restricted c8-bishop and the weak e5-square give White a huge advantage. Had the pawn been on f6, Black's position would have been playable. White can now follow with simple moves such as f3-f4 and Re1-e5. Another typical idea in this structure is to activate the g2-bishop by means of b2-b4-b5.

The remaining 9 typical positions are explained in the same way. 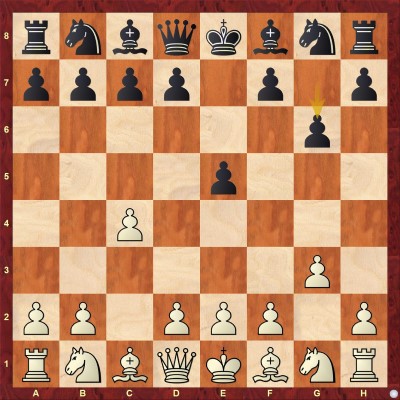 A flexible move. Black opts for a fianchetto while the development of his other minor pieces is delayed for a while. The main drawback of this approach is the lack of central control. Therefore, White's best option is to immediately strike in the centre by means of 3.d4. At this point, Black should decide between two pawn structures - symmetrical structure arising after 3...d6 4.dxe5 dxe5 or giving White a space advantage after allowing the exchange of the central pawns. In the first case, Black will face some dynamic problems due to inferior development. On the other hand, if he exchanges the central pawns, White would enjoy a long-term static advantage.

This move usually demonstrates Black's aggressive ambitions, but the lack of development makes it rather risky. As usual, White is advised to strike in the centre with 3.d4 leaving Black with a wide choice.

Regardless of the exact move order, however, Black should decide which pawn structure he will go for. The exchange ...exd4 is always favourable for White. Besides his space advantage, he can also make use of the weakening advance ...f7-f5. The structures arising after ...e5-e4 often leave Black overextended. In most of the cases, White is just in time to undermine the centre by means of f2-f3. The symmetrical structures arising after 3...d6 4.dxe5 dxe5 gives White a bunch of dynamic opportunities, partly because of the overextension provoked by ...f7-f5. The move 3...Bb4+ wouldn't change the character of the position since sooner or later Black will have to decide on the central pawn structure. 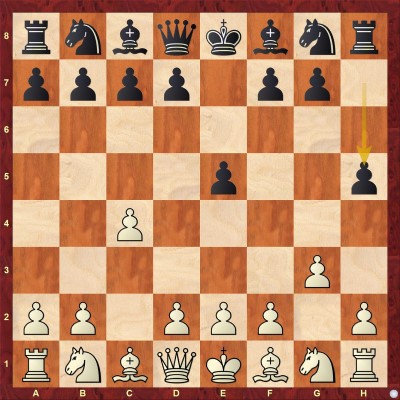 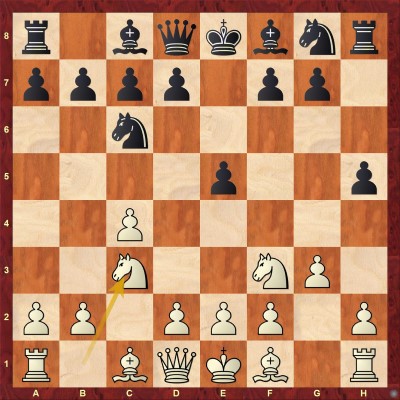 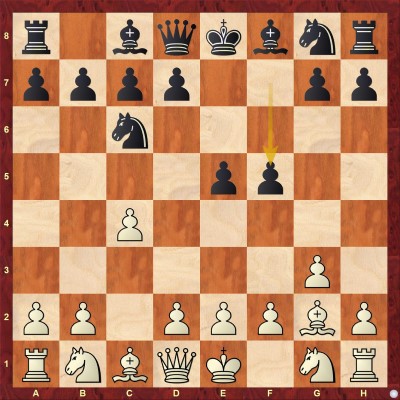 Detailed analysis shows that with a precise play White keeps an edge in all the lines. 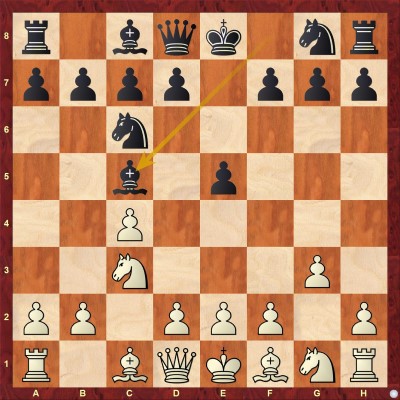 This setup has gained some popularity a few years ago. Black leaves his king's knight on its initial spot for a while and first activates the dark-squared bishop. 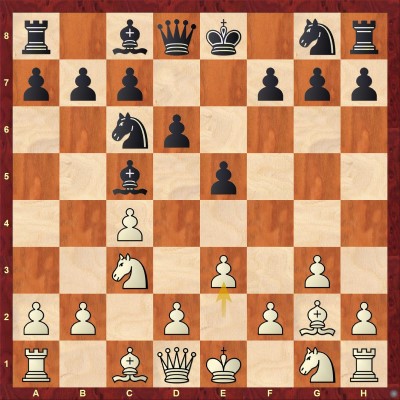 In this position, White's most harmonious setup would be Nge2 followed by d2-d4. On the other hand, however, with the white knight being on e2, the idea ...h7-h5-h4 would become dangerous. Therefore, White usually goes for Nge2 when Black had committed to ...Nf6, making ...h7-h5-h4 less threatening. In other cases, he can stick to the normal plan with Nf3 followed by d2-d4. 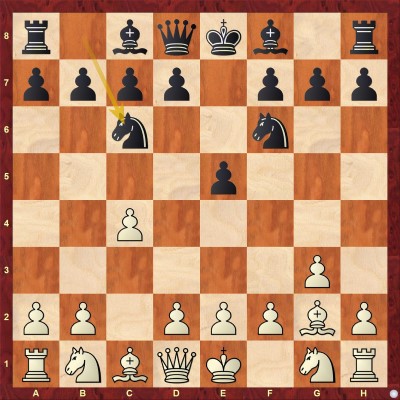 This is the most classical way of handling the position. Black keeps developing without clarifying the position of his dark-squared bishop. For example, 4.Nc3 can be met with 4...Bb4 which might lead to a Rossolimo with an extra tempo for White. Roiz, however, is not sure that this is enough for an advantage.

At this point, we go for the tricky move order starting with 4.Nf3. White is planning to follow with d2-d4 forcing the transition into a favourable pawn structure. A bunch of transpositions are possible here. For example, after 4...Bc5, White can opt for the setup based on e2-e3 followed by d2-d4. The move 4...d5 leads to a position which was covered in Part 1. 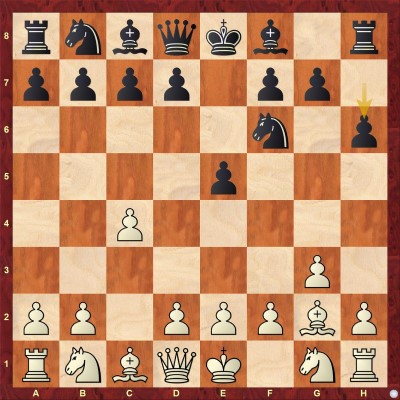 This somewhat ''mysterious'' move was tried by many top players, including Carlsen, Anand, Adams and more. The main idea is to wait until White develops his queen's knight, and then after Bf8-b4 Black might consider the typical e5-e4 advance, since g5 has been taken from the knight. At the same time, in case White deviates from moving his knight, h7-h6 might turn out to be a loss of tempo. 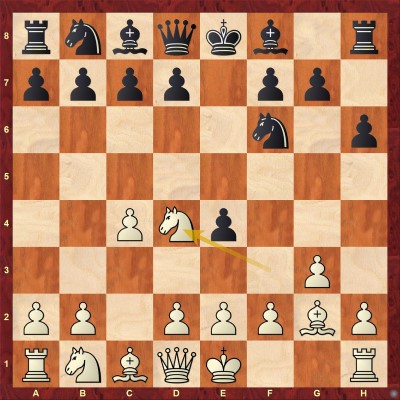 We got a sort of Reversed Alapin with a lot of pressure on e4. Roiz examines two possibilities for Black - 5...d5 and 5...Nc6. The analysis shows that none of these moves is enough for equality. 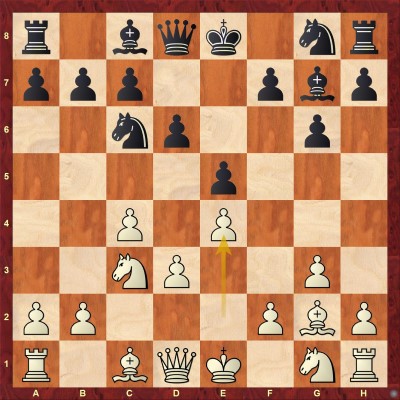 An interesting concept. The Bg2 is locked for a while, but White assumes that Black can hardly do without f7-f5, so it will be activated in the long run. Also, the current pawn structure makes it possible for White to play also on the kingside - unlike with plans of Rb1 and b2-b4-b5 when all the action solely takes place on the queenside.

The current chapter features 6...Nge7 which is quite a flexible way of development, when the f7-pawn remains unlocked. On the other hand, in comparison to 6...f5, Black's setup is less active and his attacking chances on the kingside are limited. After 7.Nge2, Black faces a choice among several setups. Since this line is less forced, the understanding of the typical ideas is very important. Hence, before reading the chapters on the Botvinning System, make sure to complete the explanations provided in the Typical Positions section. 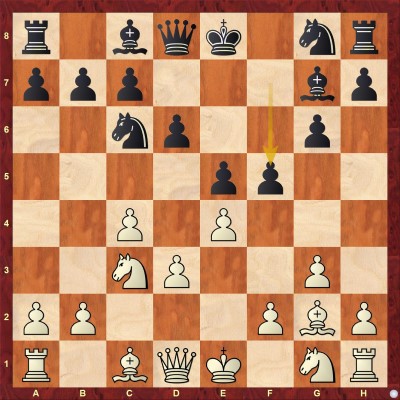 This is a more active approach. Later on, Black is planning to develop the knight to f6 (Roiz also deals with the setups based on ...Nh6).

The main position of the chapter is being reached after 7.Nge2 Nf6 8.Nd5 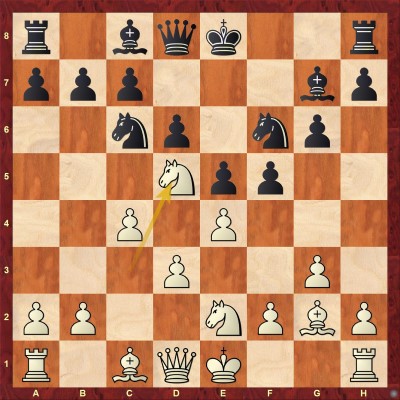 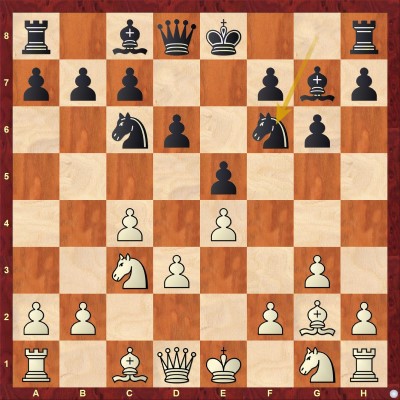 This way of development seems less flexible, as the Nf6 locks the f7-pawn, so Black's attacking abilities are limited. On the other hand, it can be relocated to c5, and later to e6. 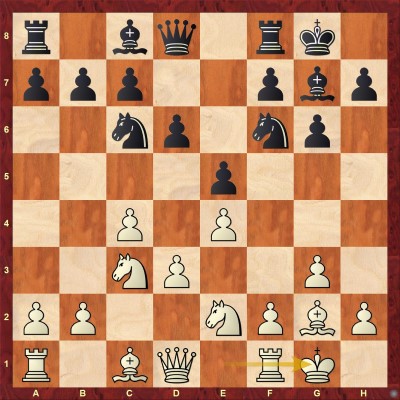 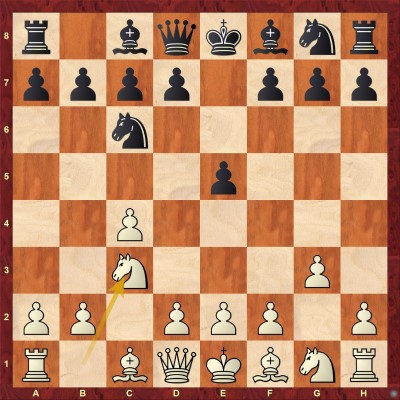 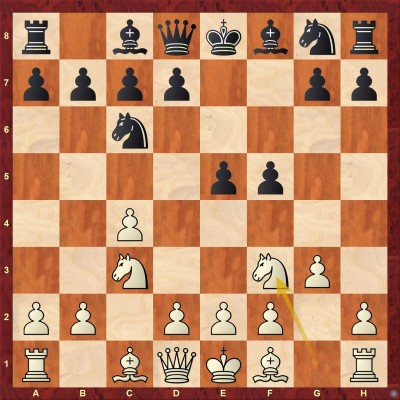 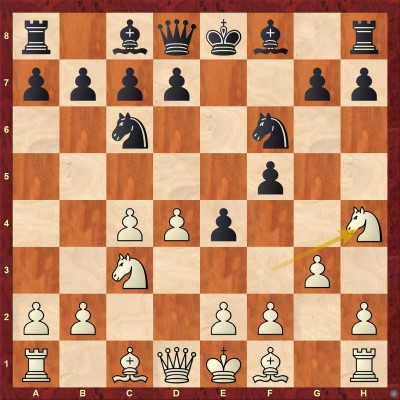 Since White hadn't played Bg2, he usually transfers the knight to f4 via the g2-square (with or without Bg5). The f4-knight gives White a very good control of the centre. Later on, he can go for the typical f2-f3.

The problem with this move order, however, is that it gives Black an alternative - 3...Nf6 4.Nf3 Bb4 when we have a well-known theoretical position which is not a subject of this survey. Therefore, while this is a possible option, the main suggestion of Roiz is to start with 3.Bg2.

In this section, the author provides 10 interactive test positions which allow you to check your knowledge of the theory. Below, you can take a look at two of them.