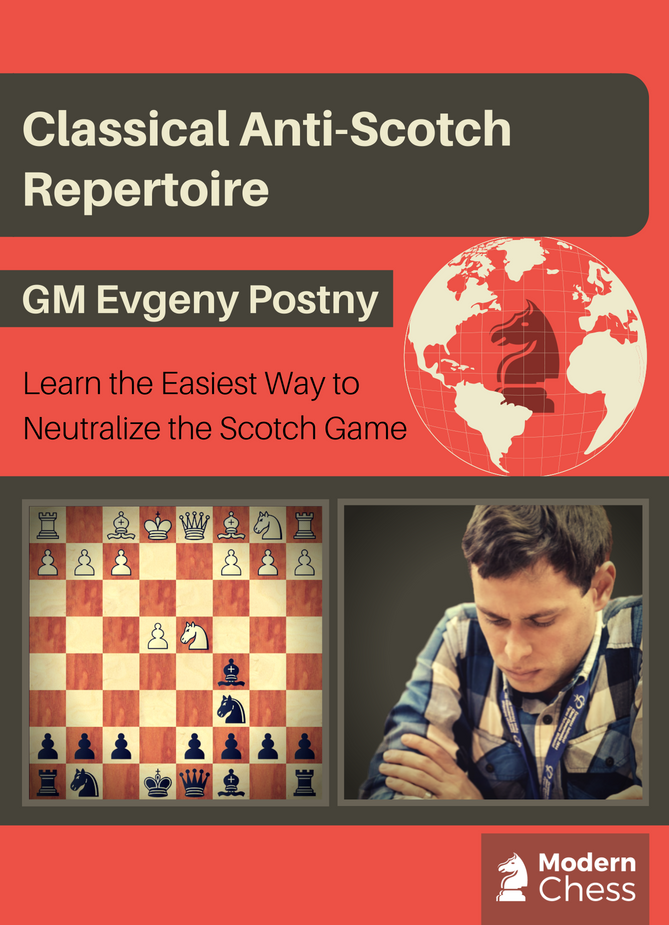 Given the fact that nowadays White experiences major difficulties to obtain an advantage in Ruy Lopez, he started looking for decent alternatives. That is why the so-called Scotch Opening became highly popular even at top level. In the recent years, modern practice showed that the Scotch offers a variety of interesting and unexplored positions. That is the reason why among it's supporters we could find the names of creative top grandmasters like Maxime Vachier-Lagrave, Ian Nepomniatchi, Alexader Morozevich and of course the great Garry Kasparov. The current data is designed to provide the reader with a solid Anti-Scotch repertoire which can be used at any level.

The Steinitz Defence Deferred is an interesting and still relatively unexplored system against the Ruy Lopez (3.Bb5). Apparently passive, yet extremely solid and quite flexible, it has survived the test of time since the late 19th century. Chess greats like Janowski, Schlechter, Capablanca, Alekhine, Keres, Smyslov, etc. The aim of this opening survey is to provide you with an easily understandable and concrete Steinitz Defence Deferred (in further text SDD) opening repertoire against the Ruy Lopez. SDD is a relatively rare occurence on the top level, but this can be a blessing in disguise for a club or a casual tournament player. Many white players dismiss such opening variations as second-rate and pay less attention to them than to Breyers and Marshalls of the world, on which they are ready to spend countless hours of analysis. If your knowledge of SDD is solid and deep, while your opponent's is superficial and coupled with "today I play against that off-beat Ruy Lopez line" approach, guess who has the upper hand? 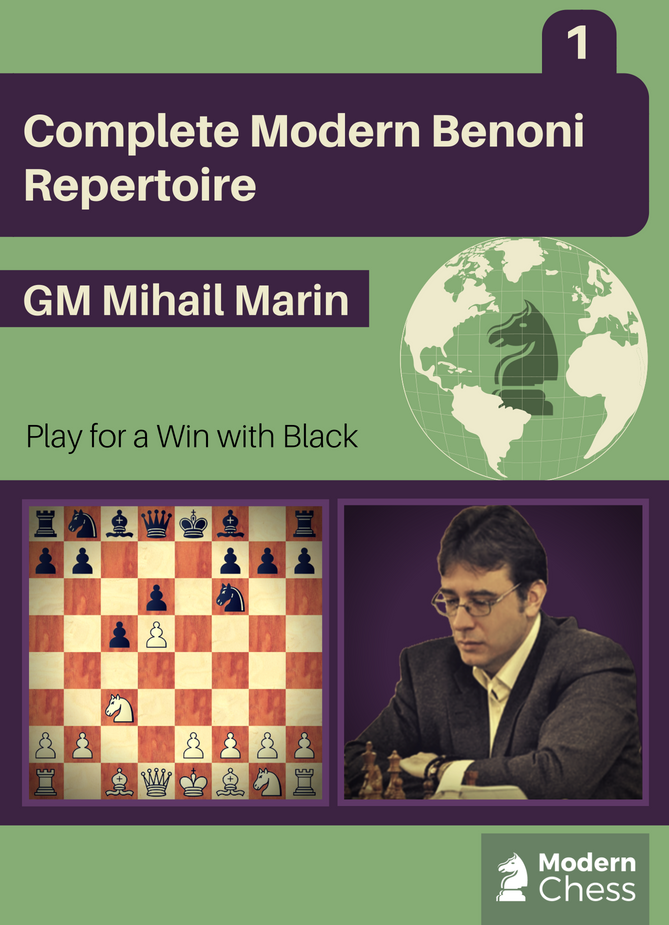 In our computer-driven time, the level of preparation is drastically increasing. Sometimes, even top players face difficulties to outplay regular 2300+ rated players. This problem is even bigger when it comes to playing for a win with Black. In most of the openings Black struggles to obtain a playable position. Nevertheless, exceptions exist. If you need an opening which is dynamic, strategically sound and offers plenty of possibilities to outplay your opponent, the Modern Benoni is your bread and butter. In his latest database for Modern Chess, one of the best Benoni experts in the world, GM Mihail Marin provides you with a complete Benoni repertoire. 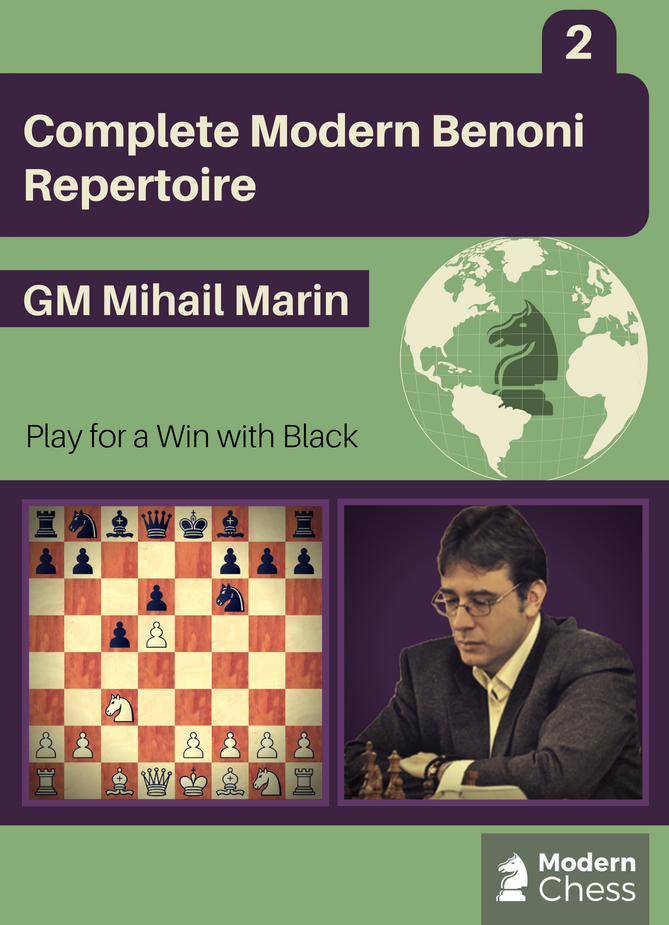 After dealing with all the Nf3-based systems, GM Mihail Marin completes his Modern Benoni with another amazing database. This time, he deals with dangerous systems like Three Pawns Attack, Saemisch System, Penrose System, as well as with some relatively rare variations. As always, Marin divides his database into three sections - Pawn Structures, Theoretical Section, and Test Section. 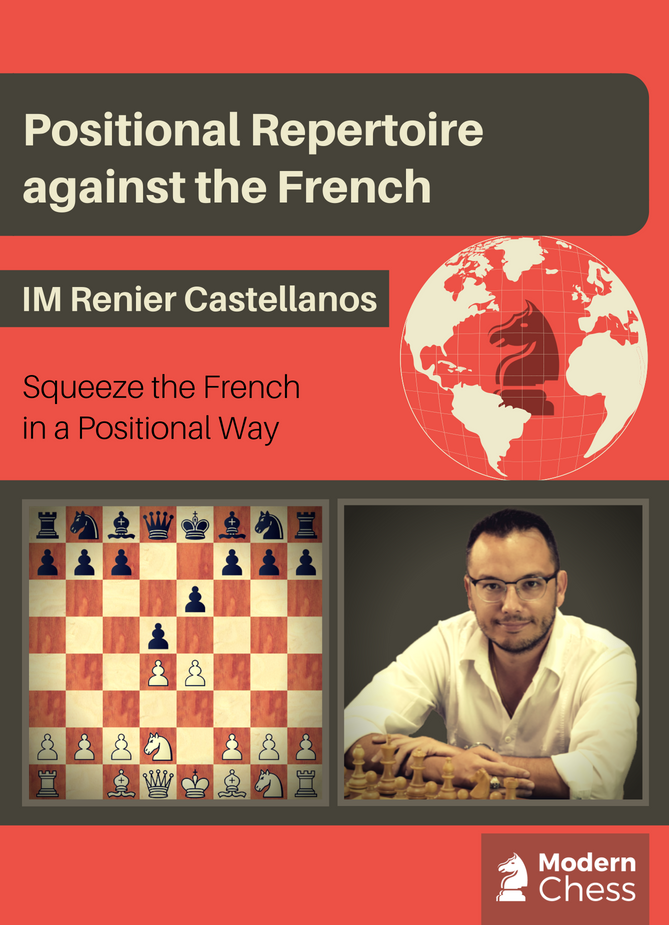 Positional Repertoire against the French

French Defence is a tough nut to crack. This opening has a reputation for being a very good counter-attacking weapon. It was used with success by almost all the great players at the past and nowadays. Since the arising middlegames are extremely complex, usually, all three results are possible. Above-mentioned considerations explain why the choice of weapon against the French Defence is so important when we play 1.e4. In the current database, IM Renier Castellanos suggests a positional repertoire against the French which is based on the so-called Tarrasch Variation. 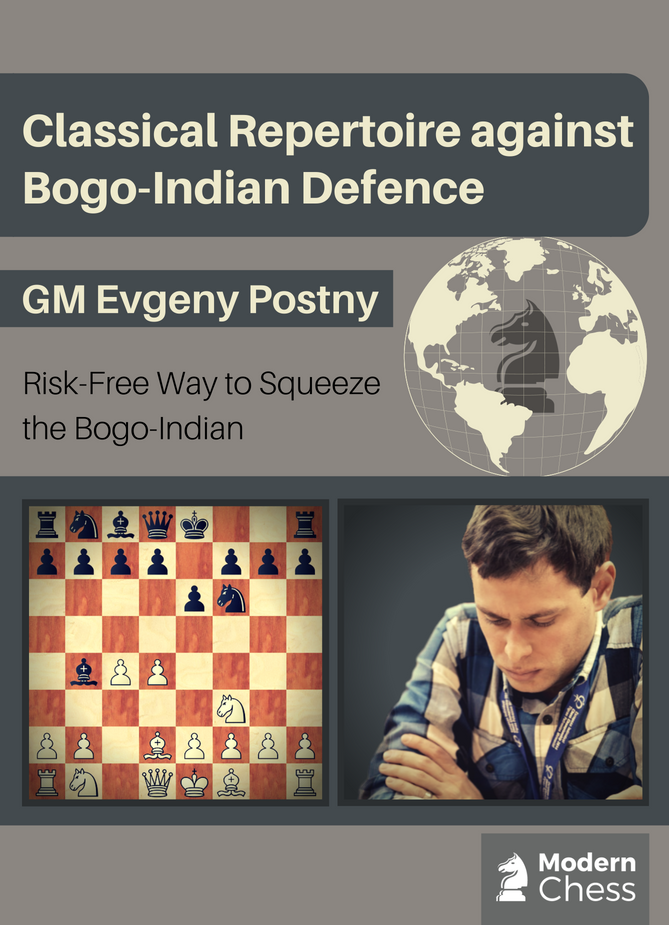 The Bogo - Indian Defence is one of the most topical opening after 1.d4. Every 1.d4 player should be very well prepared against it. White has several ways to meеt 3...Bb4+, but 4.Bd2 - is the most natural option, which would be the topic of the current survey. White is not aiming to get the pair of bishops but is continuing the normal development, counting on his space advantage in the center. What I like about the line 4.Bd2 is that White's play is natural and positionally sound. It's true that often White's advantage will be marginal. However, I strongly believe that when your opening is based on a good positional ground, it's easier, at least from a practical point of view, to handle the position in the middle game as well 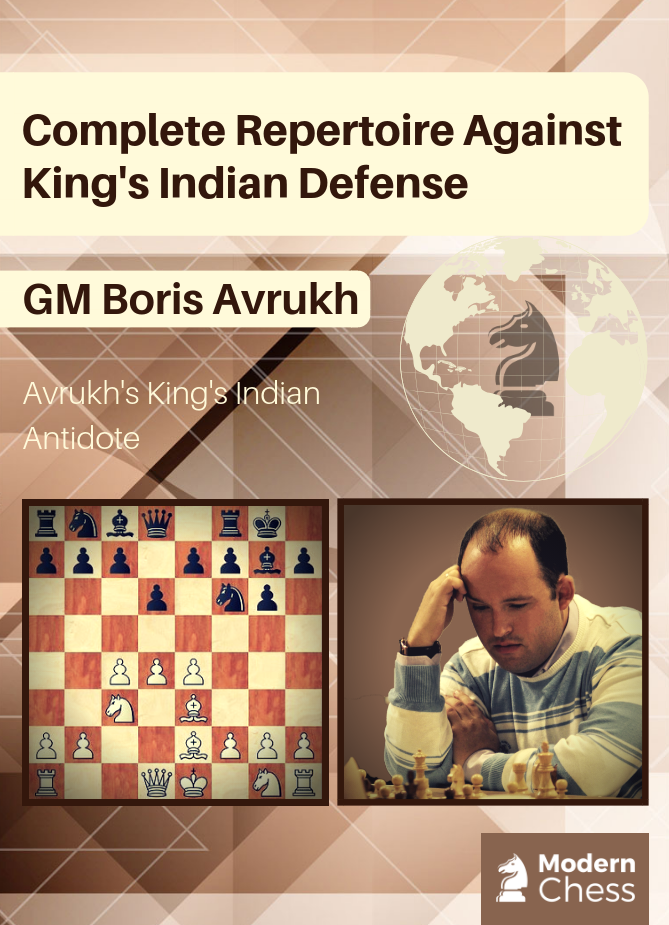 How to play against the King's Indian is a question that every 1.d4 player faces. The world-renowned theoretician and author GM Boris Avrukh provides you with an answer. His antidote is based on the set-up with 1.d4 Nf6 2.c4 g6 3.Nc3 Bg7 4.e4 d6 5.Be2 d6 6.Be3. This is a very interesting move order that has not been particularly popular until the Russian Champion Grandmaster Alexander Riazantsev has started to employ it actively. In his new opening database for Modern Chess, Avrukh presents some of the ideas he found while working as the second to former World Champion Vladimir Kramnik. 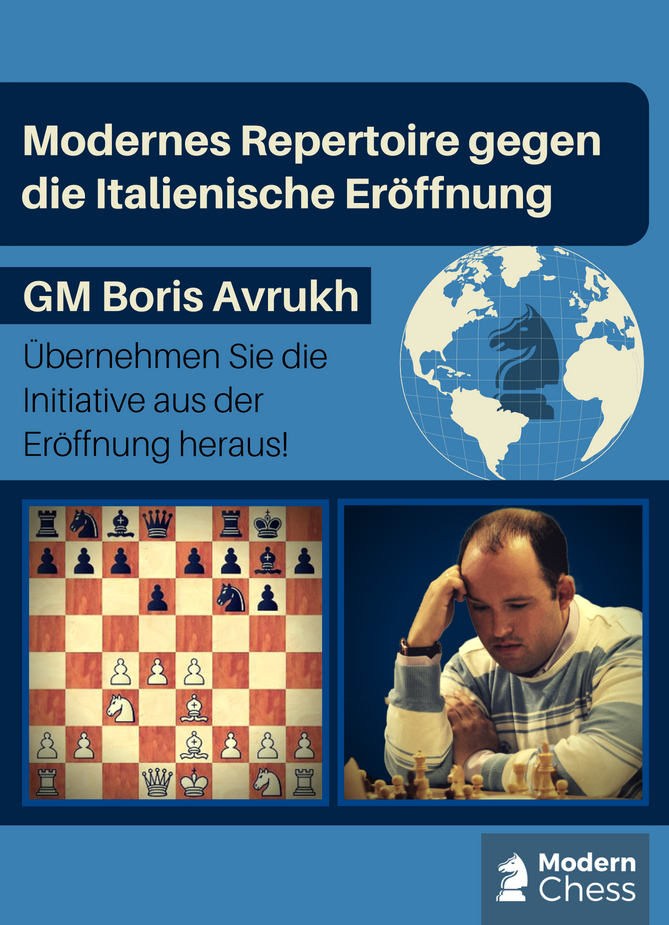 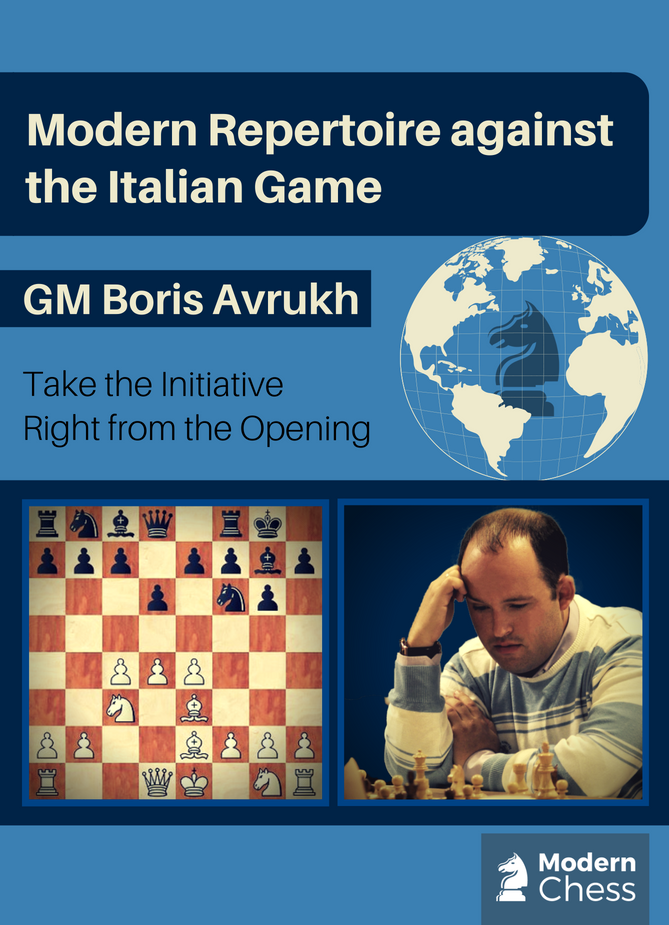 Modern Repertoire against the Italian Game

Since White has serious problems to obtain an advantage in the Berlin Defence, top players started searching for new ideas in the Italian Game. That is why every 1...e5 player should have a solid weapon against this opening. In his database, GM Boris Avrukh suggests a modern approach to this classical opening. He provides the reader with detailed explanations and valuable new ideas. This feature makes the survey suitable not only for club players but also for top grandmasters. At the end of the database, the reader could find a test section which helps him to test his understanding.

Complete Repertoire against the Benko Gambit

In his first opening database, GM Evgeny Postny provides us with a complete repertoire against the Benko Gambit. Instead of taking the pawn, White starts fighting for the initiative by playing 4.Qc2. In his analysis, GM Postny proves that even if Black plays correctly, White manages to retain a small edge in a risk-free position. This is certainly the scenario Benko players are afraid of.