Ambitious Repertoire against the Gruenfeld (April 2020)


Ambitious Repertoire against the Grunfeld Defence

Here is how the author describes the advantages of his choice:

The key move of our repertoire against the Grunfeld Defense. Now, Black seemingly has a large choice. However, as you start analyzing, you understand that two of the three moves as clearly inferior. The reason is that the whole idea behind Grunfeld is active play and pressure on the White centre. That is why playing ...Bd7 or ...Nd7, developing pieces to a passive square instead of the active dream-approach Nc6-Bg4! cannot be good. On the other hand, the position still remains complicated so we need to understand a few subtleties pretty well to gain the advantage. I would also like to mention that most players, especially ones who are not prepared for this specific line, might be rather afraid to put the knight on c6 as they always need to calculate the consequences of d4-d5. In fact, the move Bd7 has even been more popular, according to the database! That is why it is so important to study the arising positions carefully.

In this position, it is well-known that Black should play ...c7-c5! as quickly as possible in order to fight for the centre and prevent White from simply castling. In this chapter, the author takes a look at the historical developments in this line and explains why Black should opt for this exact move order and why it's not good to go 7...O-O instead.

This is the key difference between this position and the same position without castlings for both sides. If Black started with 7..c5 and White tried the same way of development, here Bxc3! with a check would have been very annoying. However, here this move wouldn't be a check anymore so White stabilizes his centre and keeps a clear advantage. 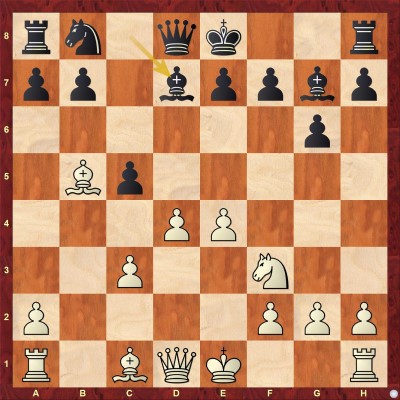 It is important to answer 8...Bd7 with 9.Be2 with the idea to castle and stabilize the position. The main position of the current chapter arises after 9...Bg4 10.Rb1!

This is the main reason why the line with Bd7 is not considered good. As we had seen before, Bxc3+ is a problem in many lines so White removes the rook from the long diagonal while also putting pressure on b7. Black can choose to either play calmly and finish the development or choose a rather forcing approach which leads him to a somewhat worse simplified position. In both cases, White maintains his edge.

In this chapter, the author deals with 2 main continuations - 9...0-0 and 9...cxd4. While Krykun deals with many possible move orders and transpositions, the most critical position arises after 9...cxd4 10.cxd4 Bc6

If our rook wasn't on a1, we could simply play d4-d5, kicking this bishop out with a tempo. Unfortunately, this is not the case so we need to start with 11.Qd3. However, it's not really a big deal as our goal here is not to win as many tempi as possible. Instead, our task is to stabilize the position and keep the advantage thanks to our lovely centre.

This is a rather rare move, however, it is the one that is getting rather trendy, as lately it has been used by Svidler and Shankland among others. On top of that, it was recently recommended by Delchev in his book on Grunfeld, published in 2019, so we need to study this continuation rather carefully. Black is immediately putting pressure on the c3-pawn, making us defend it.

This is a novelty. White is firmly protecting the centre. Black should probably go for an exchange of the queens. In this chapter, the author demonstrates that the arising endgame is far from easy for Black.

This is a seemingly "fighting" move which allows Black to keep more pieces on the board while also not allowing the forcing variations that we are about to see in the next chapters. Sounds attractive, doesn't it? Unfortunately, everything in chess comes at a certain cost. In this case, Black's knight will be placed extremely passively, which will prevent him from pursuing the main idea of Grunfeld - it will be nearly impossible to put pressure on the White centre!

White prepares the f1-square for his bishops and supports the centre. Further analysis shows that Black cannot equalize in this position.

In this chapter, the author starts covering Black's most challenging line - 8...Nc6. By developing the knight, Black immediately puts pressure on the centre.

The author suggests two ways of playing for White - 9.d5 and the rare 9.Rb1.

He first deals with 9.d5. Here is what Krykun has to say about this move:

The most forcing move. It has never been considered dangerous, as people believed Black has about 3-4 decent continuations. However, while I was not able to find an advantage for White in every single line, I realized that only one(!) variation can be called a reliable solution for Black! In many lines, he almost loses by force, instead. For example, I have managed to find a new idea and pose problems for Black in the line that Avrukh recommends in his GM Repertoire book on Grunfeld. I have consulted other sources as well - GM Delchev in his first book "The Safest Grunfeld" doesn't consider 9.d5 at all, while GM Milos Pavlovic in his work "Unknown Weapons in the Grunfeld" doesn't analyze 8.Bb5 whatsoever.

In his analysis, the author proves that White has more than sufficient compensation for the exchange.

This position occurred in 3 games. In his analysis, FM Krykun provides new ideas which completely change the evaluation. It turns out that Black is almost losing in this line.