There are several reasons why Viktor L'vovich Kortschnoj is one of the most known chess legends. His conflictive character frequently gave birth to anecdotes or open criticism regarding certain incidents during the games and tournaments. His results place him among the most outstanding post-war grandmasters. He has been a constant Candidate to the World title for more than a quarter of a century. Three times he has ended up as a World Vice-champion, after his matches with Karpov. As many players by 40-50 years younger had the pleasure to find out the hard way, Kortschnoj continued to approach every single game with all the due seriosity, even when he was in his '80s. But as a player who has been following him with curiosity ever since the early '70s, I believe that these form only the tip of the iceberg. What impresses me most is the depth and originality of Kortschnoj's games, his readiness to embrace a wide range of positions and styles. Kortschnoj grew up as a concrete player, with excellent tactical and calculating skills. He was an eager material grabber, ready to defend, save or even turn around unpleasant positions with a material advantage. According to his confession, the label of "masochist" which some had attached to him, was anything but pleasant, and at the age of 30, a Soviet multiple champion and World title candidate, he understood that he was not the kind of player he wanted to be. He decided to re-learn the chess fundaments from scratch, a process which lasted for about ten years when he finally became a player with a sound and universal style. It is hardly a coincidence that he became a World vice-champion precisely after that moment. Born in 1931, Kortschnoj turned 40 in 1971 and his matches with Karpov took place in 1974, 1978 and 1981. Kortschnoj also wrote about himself that he had a limited positional understanding, but this must have referred to his earlier period. I believe that Botvinnik was right considering him a deeper strategist than Karpov, explaining the latter's systematic success in their matches by the fact that an inner instinct allowed him to maintain a better average level along with the game. I assume that the age difference of 20 years also played some part...

In this database, I have tried to illustrate several aspects of Kortschnoj's strategic understanding. There are several reasons why I have chosen the material from two main periods. The first period includes the years when the re-learning process had started and the following time. I believe that these must have been among the most inspiring years when his curiosity was wide open to what happens and may happen on the chessboard. The games from the other group were played when Kortschnoj was aged 70+ and 80. Most of his opponents from these games are top players or rising stars. This way I have advocated a surprising (and to many unacceptable) idea. If at such an advanced age, just half or less of the player he had been, he could still crush such strong opponent, what would have happened if he could have got his youth back before sitting to play with the modern elite? At the same time, I wanted to avoid as much as possible commenting games again that I had published elsewhere. This was not easy, as I have been writing a lot about Kortschnoj over the past decades. I have also left aside games I have already published for Modern Chess, even though some suited the purpose of this article very well. A good example is his win with black against Karpov using the Open Spanish. But the most painful omission is his win at the age of 80 against a 2700+ Caruana, which I have used more than once in my earlier materials.

I have divided the material into three categories:

Each section is structured as follows:

In total, the database consists of 15 annotated games, 30 test positions, and 30 solutions. Each solution features a fragment which is taken from the games of Kortschnoj.

Kortschnoj used to treasure the classical values, such as space advantage, control over open files, the bishops' pair, quick development and so on. What makes him remarkable is that he knew how to apply and combine all these items and all the classical principles according to the tiniest concrete nuances. He perfectly knew how to keep the positional domination for a long time until finding the key to the enemy position, but also to be alert to any given opportunity to speed up the technical process.

Below, I provide one of the annotated games and two test positions. 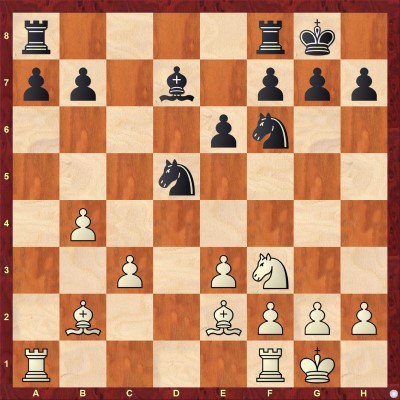 White's position is preferable due to his bishops' pair, but Black must have hoped that his normal development would ensure him a defensible position. And yet, Kortschnoj's play in the next phase yielded him an almost decisive advantage. How would you start? 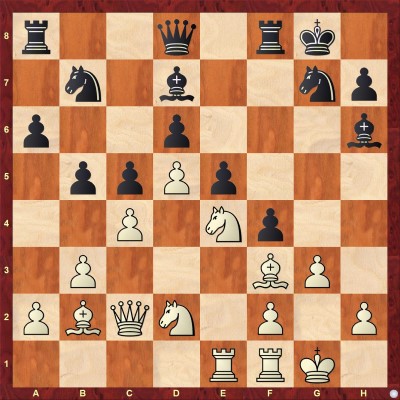 White has good control on the light squares and the knight on b7 is far from any action. But Black seems to have kingside attacking chances. What is the best way to turn the position one-sided (to White's favour, of course!)

The remaining two categories are structured in the same way.