The current database completes GM Mihail Marins' Catalan project. This time, he focuses on Black's attempts to avoid the Catalan.

True to his approach, in this database, Marin advocates positionally sound but not necessarily fashionable lines. That makes the suggested repertoire valuable from a practical point of view. By following Marin's recommendations, we have good chances to surprise our opponents.

Traditionally, at the beginning of his opening databases, GM Mihail Marin deals with typical pawn structures. In this database, he covers positions in which White deviates from his queenside strategy. Instead, he goes for a kingside attack.

In the introduction to this article, Marin shares his personal Catalan story:

Having made my first chess steps during Fischer's years of glory I could not help developing a strong sympathy towards the king's bishop, irrespective of the color I was playing with. From my early years, opening repertoire, the Sozin/Velimirovic/Fischer attack (6.Bc4 in several Sicilian systems) couldn't miss and I scored many spectacular wins using the strength of my light-squared bishop.
Many decades later, (more precisely in 1992) I included the Catalan in my repertoire. Fischer's favorite bishop's influence was once again clear, but this time the main diagonal was h1-a8. White's main ambitions are connected with the center and the queenside, something highlighted in the previous articles. But there are games when after a long introductory fighting phase on the usual areas, White uses his higher mobility (deriving from his space advantage and light initiative) for suddenly switching to a deadly kingside attack. This is the subject of the present article.
In such cases, the Catalan bishop can be a hero in two ways. It can either keep Black busy on the queenside, or it could join the attack with, say, Be4.

After this introduction, the author illustrates his point by showing one of his early Catalan games.

As we have already pointed out, with this database, GM Marin goes even beyond the idea of building a Catalan repertoire. His main focus is on the position which arises after 1.d4 Nf6 2.c4 e6 3.g3

This move order is particularly effective against Nimzo-Indian or Queen's Indian players. Of course, 3...d5 will be met by 4.Nf3 transposing to the classical Catalan. If Black wants to avoid Catalan positions, he should go for 3...Bb4 or 3...c5. 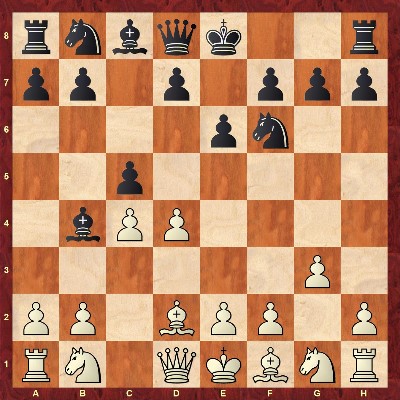 This is one of the traditional setups. Black agrees to capture away from the center in order to restrict the b1-knight and try getting the c5-square for his knights after ...d7-d6 and ...e6-e5.

This rare move turns out to be quite dangerous for Black. Here is what Marin has to say about the ideas behind 7.a3!:

A well-timed break. The point is that Black needs releasing the tension or else sacrifice a pawn with unclear compensation. Once again this happens because the long diagonal is open.

In this position, the author deal with no less than 5 continuations for Black. According to his analysis, White maintains some pressure in all the lines. 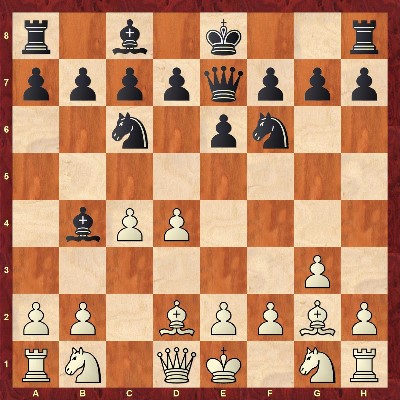 This is another traditional setup. Black is planning to adopt a King's Indian structure with ...d7-d6 and ...e6-e5, after having exchanged the "bad" (but sometimes good or killing) dark-squared bishop. Note that the positions arising after 5...0-0 and 5...Bxd2 are dealt with in the next chapters.

Once again a typical Catalan setup. The move 6.e3 consolidates the d4-pawn and starts a coherent developing plan. Furthermore, White keeps the e4-square under control.
White mainly plays in the spirit of the following English variation: 1.c4 e5 2.g3 c6 3.d4 Bb4+ 4.Bd2 Bxd2+ 5.Qxd2 followed by e2-e3 and Nge2. The differences here are that Black has wasted a tempo with his e-pawn and spent another one of the generally useful ...Qe7, which, however, reduces his chances for early counterplay.

In his annotations to Chapter 2, the author proves that White retains a slight but stable edge in the arising positions. 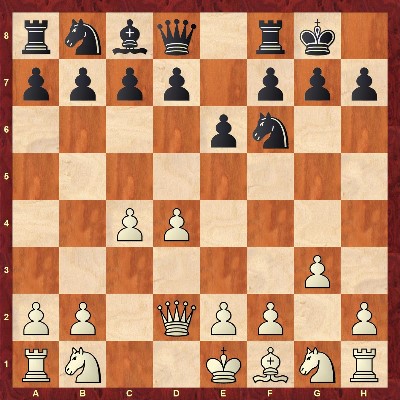 This apparently simplistic line has enjoyed some popularity lately. Decades ago, from the strong players, only such a slow strategist as Ulf Andersson would be happy with Black's position.
The main merits of this line are that Black is absolved of any early worries and can develop normally without wasting time. Nevertheless, later on, Black can face some problems on the dark squares.

Given the fact that this line is highly transpositional, many alternatives are possible on each move. That is the reason why one should focus on the basic positional ideas and plans. Besides the explanations concerning the subtleties of the different move orders, Marin also provides deep strategical insights on the arising positions. He proves that with a precise play, White keeps a slight edge in all the lines. 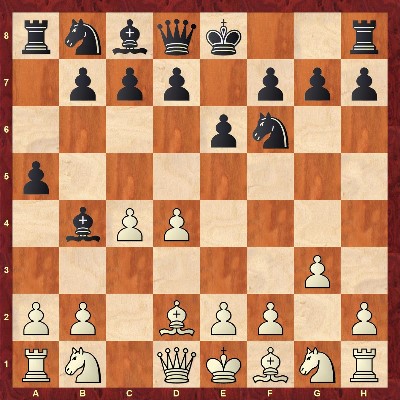 Strategically, this is the most consistent way of defending the bishop, as White would not consider exchanging it. Such an exchange would only improve Black's structure (compare with ...cxb4 in line 1).

After 5.Bg2, Black is at a crossroad. 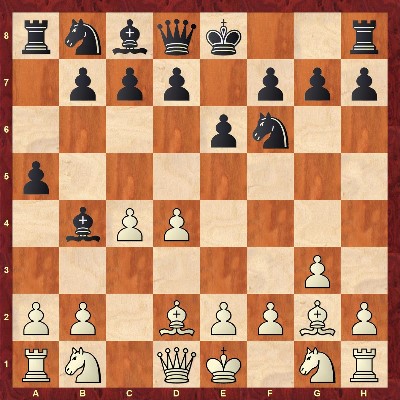 At this point, Marin deals with 3 main continuations for Black:

Given the fact that the variation is not very concrete, again, transpositions are possible. In his annotations, Marin shows the drawbacks of the move 4...a5. Even with an optimal play, Black fails to achieve a complete equality. 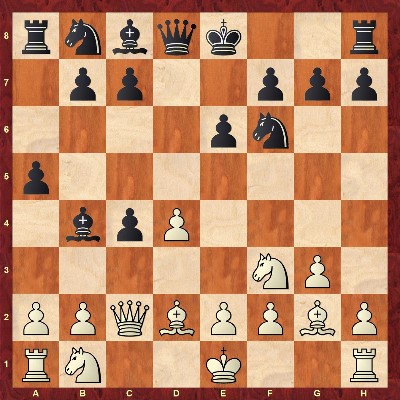 We have reached a very important position. Now, Black faces a choice. He has 2 main options - the fashionable 7...Bxd2 and the classical 7...Nc6. 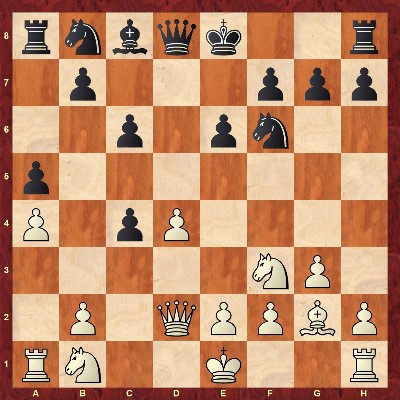 With his last move, White stops Black's queenside expansion and wants to regain the c4-pawn by means of Na3.

In this position, Black has two main choices - 9...b5 and 9...Ne4 which was advocated by Topalov. Both lines are very interesting and require a precise play from White. In both directions, however, Marin challenges Black's concept with very interesting novelties. It seems that Black has problems to equalize in this line.

This is Black's traditional system. Since White will waste some time on regaining the c4-pawn, Black is planning to complete the development and to put some pressure on the center. The knight, however, is usually not well placed in front of the c7-pawn.

The main position of the variation arises after the moves 8.Qxc4 Qd5 9.Qd3 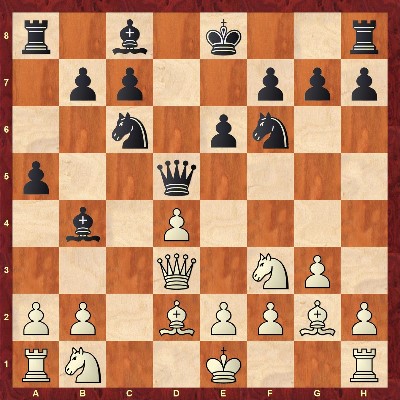 After neutralizing Black's temporary piece activity, White is better due to better control of the center. Also, in a long-term, the c6-knight turns out to be misplaced. 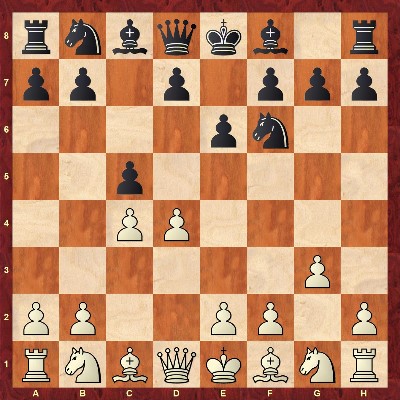 This is how Marin introduces the systems which begin with 3...c5:

Time has come to focus on a series of lines resulting when White rejects Black's invitation to a Benoni. I would refrain from 4.d5 not only because this would cause some conflict with my Benoni Databases (in principle, there is always a way), but mainly because I firmly believe that the Fianchetto system is one of the least dangerous for Black in the Benoni.
White could avoid transposing to these lines in several ways. First of all, if Black starts the game with the Queen's Gambit move order he cannot transpose to the lines examined below. In his turn, White could use the Reti or English move order or else play 1.d4 Nf6 2.c4 e6 3.Nf3 and only after 3...d5 switch to 4.g3, but this latter would allow 3...b6 of course.

Strictly speaking, the position could be classified as a Symmetrical English, but this does not change the essence of the matter: the Catalan bishop remains our main pride.

The classical approach and the sounder one. White has also tried other knight retreats, aimed at keeping the f-pawn's and g2-bishop's paths clear in order to win the d4-pawn with f2-f4 and Bxc6. Nevertheless, all these options weaken the kingside offering Black an excellent compensation. The main move keeps an eye not only on d4 but also on e5, preparing to open the center with e2-e3.

This is White's only active plan as he cannot allow Black consolidate his center. After the exchange on d4, Black will get a passed pawn, which White will try proving weak, using his piece activity (not least that of his Catalan bishop).

The move 9...Be7 is by far the most consistent one. That is why Marin deals with it in the next Chapter.

In chapter 7, the author shows why the moves 9...d3, 9...Bc5 and 9...Bg4 fail to achieve an equality. The logic is fairly simple - by delaying 9...Be7, Black is neglecting the development. Of course, things are far from simple. Since the arising positions are concrete, a precision is required on every move.

This chapter deals with Black's main move 9...Be7. 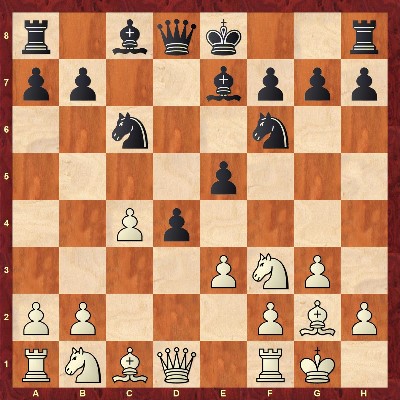 Optically, this is the most modest possible continuation but has the merit of allowing Black to complete his development without any major problem. White can prove only a slight advantage at best.
In this position, Marin suggests White's most natural way of development - 10.exd4 exd4 11.Bf4

In this position, Black has two main moves - 11...Be6 and 11...0-0. Both moves are being played on a top level. Objectively speaking, with a precise play, Black will be very close to the equality. Nevertheless, in his analysis, Marin shows how White can create practical problems for his opponent. As always, he provides some fresh novelties which open new directions in this line.

Decades ago, this used to be one of Benoni players' favorite systems. But the premature queen and bishop development is very risky. Of course, instead of 6...Bc5, Black can play 6...Nc6 or 6...Bb4. These options are dealed with in the next chapters. 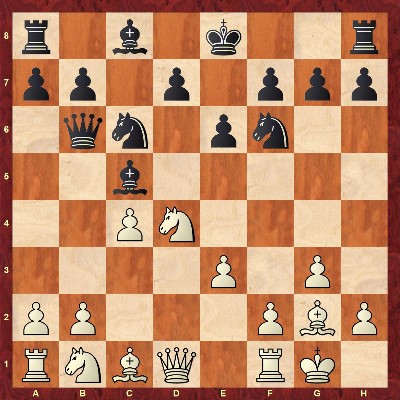 This pawn sacrifice is the only way to question the viability of Black's plan. The advance in development and Black's weaknesses on dark squares offer ample compensation for the pawn. Concrete line the author provides us with prove this evaluation.

Black attacks the c4-pawn aiming at spoiling White's natural development based on Nc3.

In this position, Marin's suggestion is 6.Nd2. 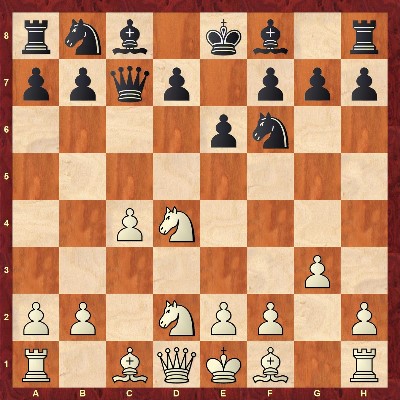 This developing move is the most constructive way of defending the pawn. At this point, Marin deals with no less than 5 continuations for Black - 6...b6, 6...Bb4, 6...a6, 6...Bc5, and 6...Nc6. According to his analysis, White retains a slight pressure due to his better development and lasting pressure along the long diagonal.

This is an open invitation to the Fianchetto Nimzoindian after 6.Nc3. This may be the most principled answer but covering it here would make no sense as this would require a whole repertoire database. Maybe as a next project!? 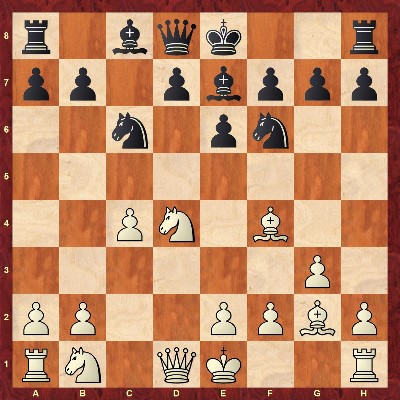 Marin prefers this move over 8.Bc3 which used to be the main line. The bishop's situation is not that bad now, but usually, this is the best square for the knight, keeping the d5-square under severe control.

In his analysis, Marin proves that after 8.Bf4, White keeps a small but lasting edge. 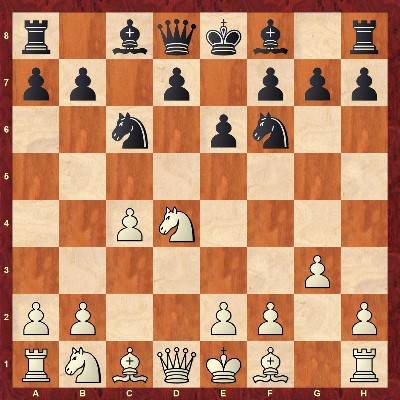 Black plays in the spirit of one of the main Symmetrical English systems. Here, White should start with 6.Bg2! which is the best way to restrict Black's counterplay. Black can try many continuations, most of them bearing similarity with the main English line with Nc3 instead of Bg2, but White seems to be prepared against all of them.

As always, at the end of the database, you can find 20 interactive test positions which allow you to test your theoretical knowledge. You can find 5 of the positions below.