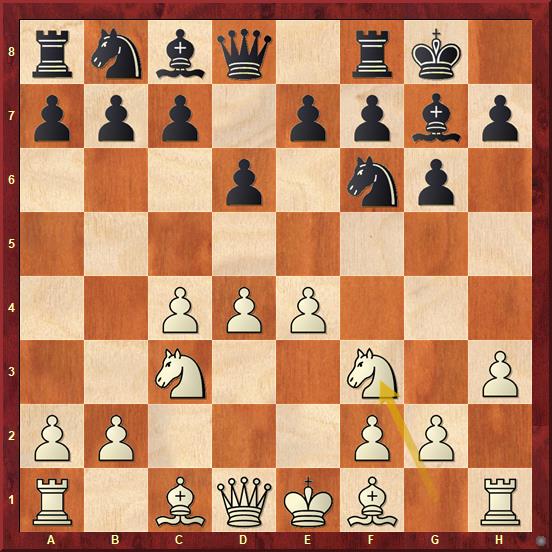 The systems based on an early h2-h3 is named after the Soviet international master Vladimir Makogonov who has used it with success more than half a century ago. Boris  Spassky revealed the essence of this opening very clearly: "White prepares the bishop's development to e3 by defending against the threat ...Ng4. Besides, he has in view g2-g4, when unlike in the Saemisch attack the f3-square is available for the knight."
Black can choose between two plans here: 6...c5 7.d5 - entering Benoni or 6...e5 7.d5 - playing in the KID fashion. 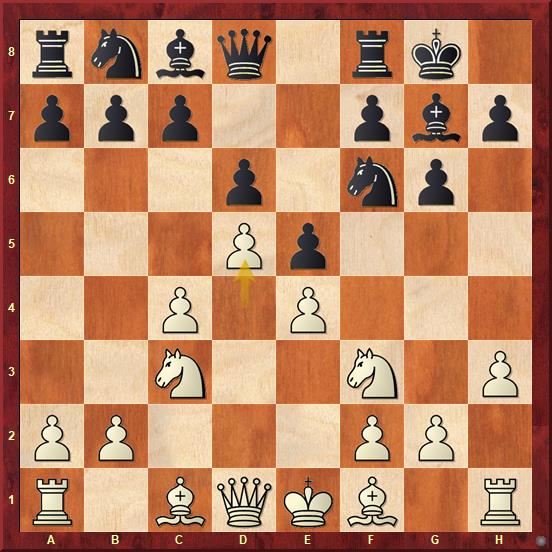 In the first three games, the author examines three possible scenarios of Black's play:
1) Black ignores the kingside and prepares his attack on the opposite wing
2) Black opens the kingside before White plays g2-g4
3) Black combines the two ideas 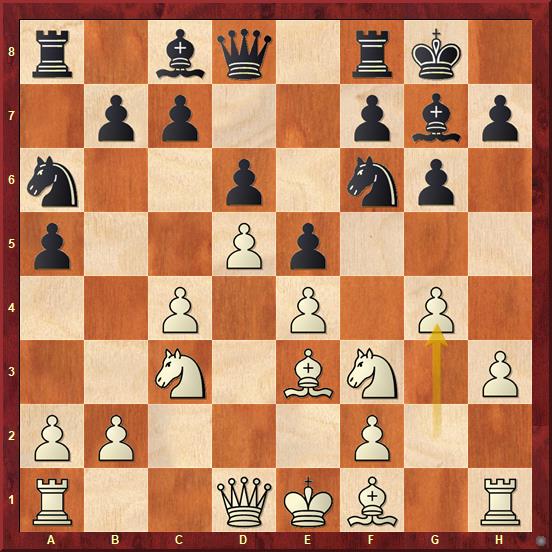 The g2-g4 advance is of an ambiguous nature. At this stage, it is a prophylactic move since Black has problems to execute his typical plan based on ...f7-f5. In a number of positions, however, White can start pushing his kingside pawns, thus creating attacking possibilities on the kingside. This usually happens when Black starts transferring his minor pieces to the kingside.
In Chapter 1-2 GM Marin examines the move 9...Nd7 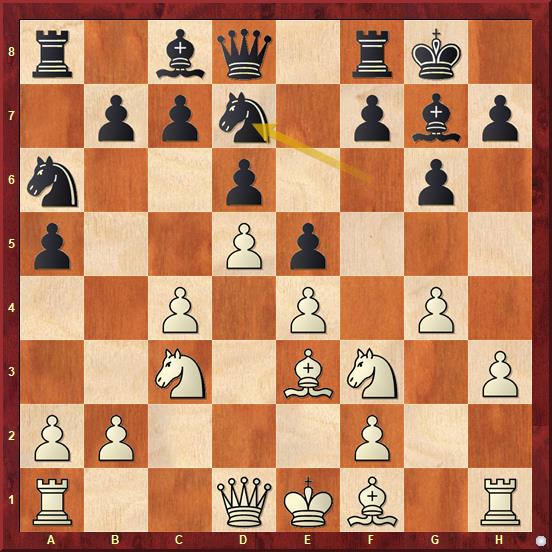 Black is transferring the knight to the queenside, thus freeing the way for f7-f5. The problem is that Black has only one good square - c5, but two knights who want to go there. The f7-f5-break also has some drawbacks - White can open g-file and create some threats against Black's monarch. Also, Black loses some time. White's scheme of development is a2-a3, Rg1, Be2, Nd2 and depending on Black's play 0-0-0 or Kf1. If you study well the subtleties of this structure, you should enjoy playing this position with White. Black's main counterplay which is based on f7-f5 is doubtful and his plan is not clear. On the other hand, White has plenty of useful moves and a clear plan to push "h" and "g" pawns.
Chapter 3-4 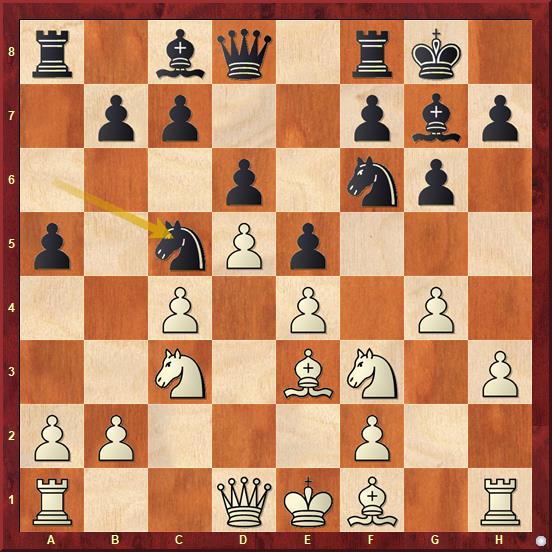 With this move, Black tries to save time on the maneuver Nf6-d7-c5. In this case, however, Black will face some serious coordination problems. After the eventual g4-g5, the d7-square may become overcrowded.
White's plan is similar to the one from the previous chapters: Nd2-Be2 and pushing "h" and "g" pawns trying to create counterplay on the kingside. 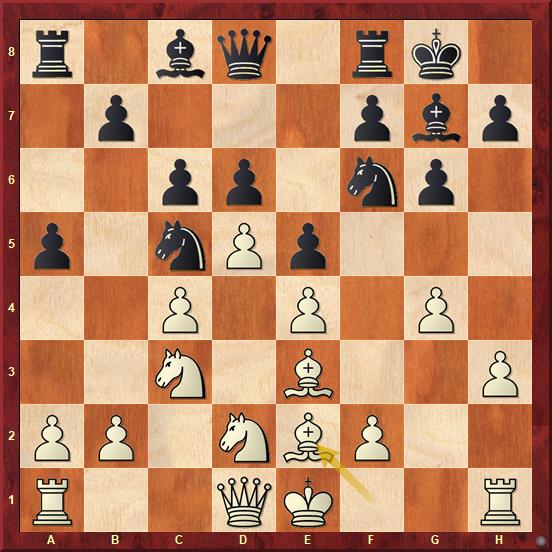 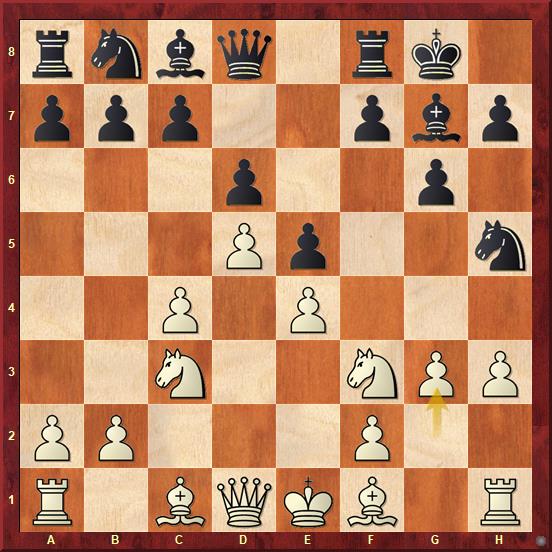 The move 7...Nh5 is stopping g2-g4 and preparing f7-f5 break.
White has several ways to answer it, but the most solid move is 8.g3.
It is important to understand this subtle positional move. After preventing Black's ...Nf4, White is planning to gradually drive the knight back to f6. Such an idea can be realized by means of simple moves such as Be2, Be3, and Nd2. That is the reason why Black usually goes for the quick f7-f5 advance. White is advised to answer this advance with exf5 and castle long. Even though Black's f5 and e5 pawns control a number of important squares, in many positions, they can prove vulnerable. White usually tries to provoke the advance of one of these pawns and then make use of the weakened dark or light squares. A typical way to put pressure would be the advance g3-g4. Another idea to attack the f5-pawn is to play simple moves like Bd3, Qc2, and Nh4 (or even Ng5). 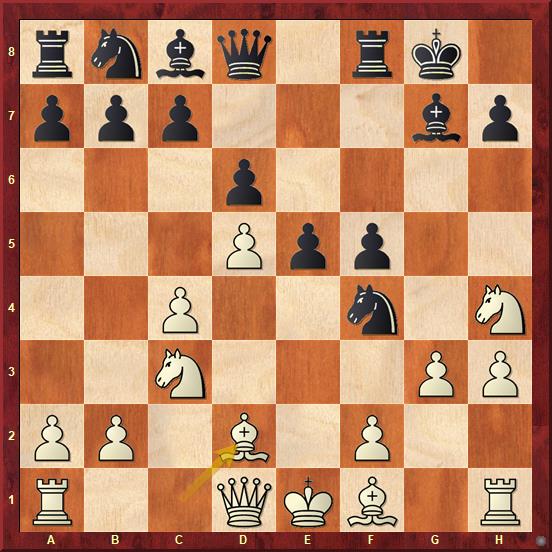 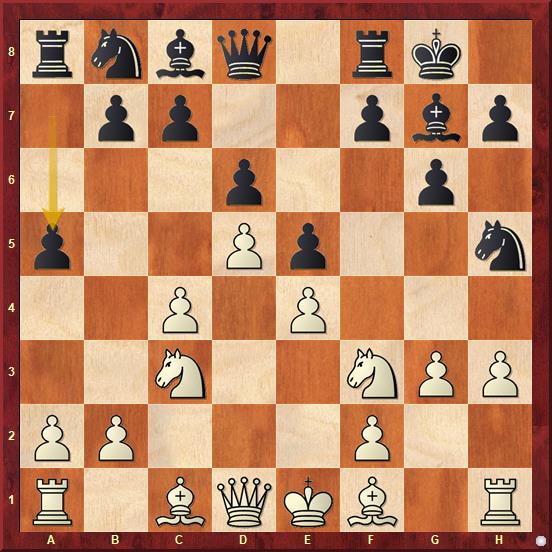 Since the benefits of an early attack with ...f7-f5 are far from clear, Black can also think of preparing it. That is why he first develops the queenside.
But after the important commitment involved by the knight jump, this move is a bit slow. White should continue 9.Be3 with the idea Nd2 and if ...f7-f5 then we reach positions similar to the previous chapters where the merit of 8...a5 is questionable. If Black delays f7-f5 then the break will be impossible after Nd2. 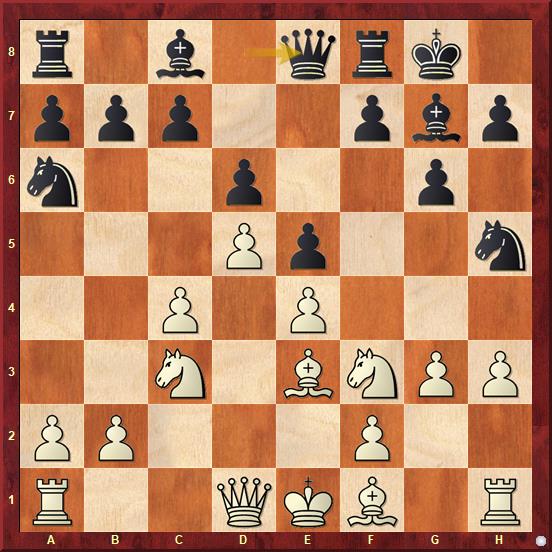 Black has two important alternatives in this position.
Chapter 8 is dedicated to the move 9...Qe8

Chapter 9 is about the most straightforward continuation 9...f5 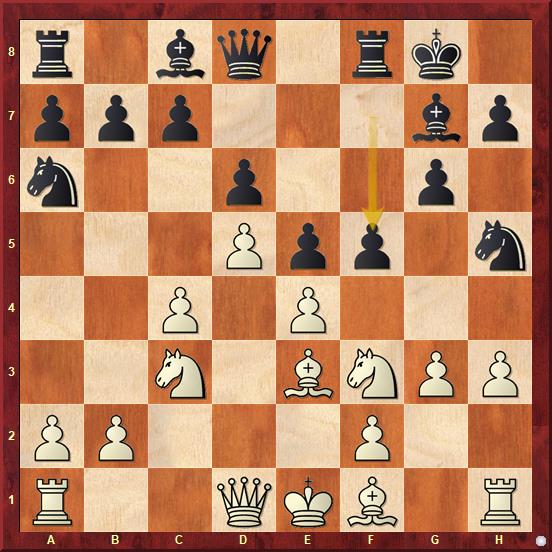 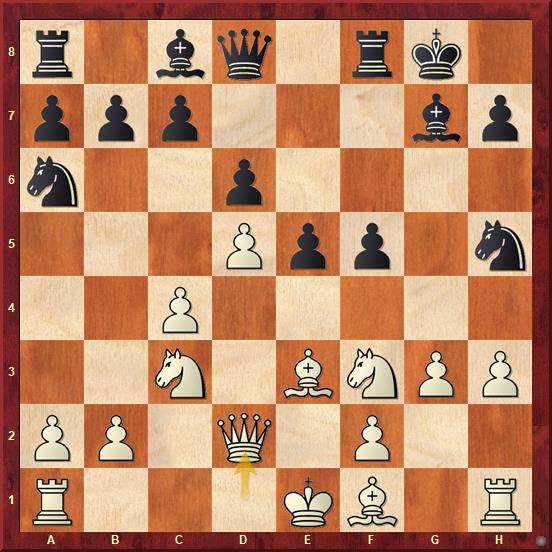 This rare move is very strong. White keeps developing naturally, ignoring the obvious threat ...f5-f4. At the same time, he maintains the flexibility regarding the choice between Nh4 and Ng5. 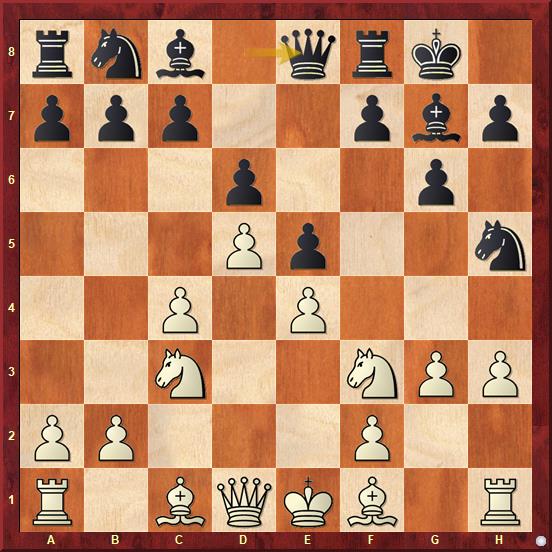 We have noticed that the pawn break is usually combined with a queen move on the e-file. White should continue 9.Be2, immediately starting to build up the pressure against the h5-knight. 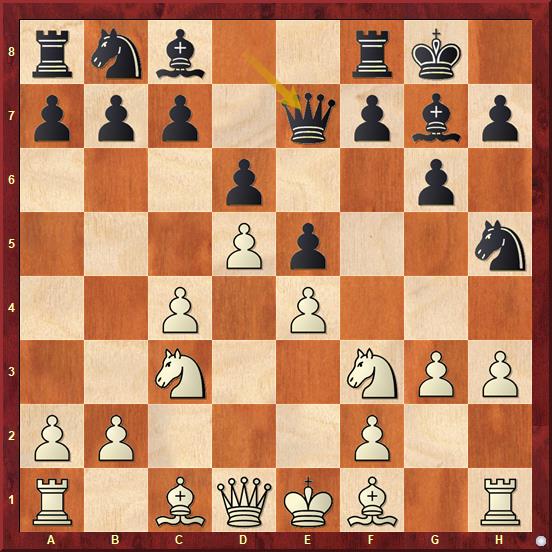 This move, introduced by Grischuk on the top level, induces some major (though subtle) changes in comparison to 8...Qe8. True, the queen is not ready to defend the knight on h5, but keeping it on the h4-d8 diagonal offers him some tactical ideas, allowing him to simply sacrifice the knight in certain lines.

Here White's plan is different. The best move is 9.Nh2! 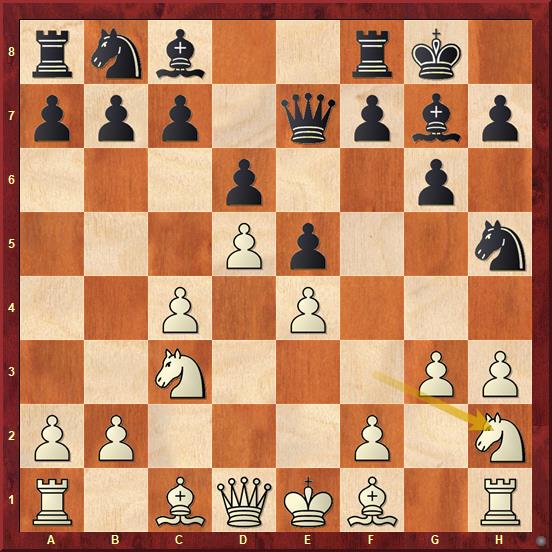 A well-timed deviation from all known plans. White simply prevents ...f7-f5 and will soon drive the black knight back from h5. The knight only apparently stands badly on h2. After g3-g4 White can either maneuver it to g3 or, after g4-g5, jump directly to g4. 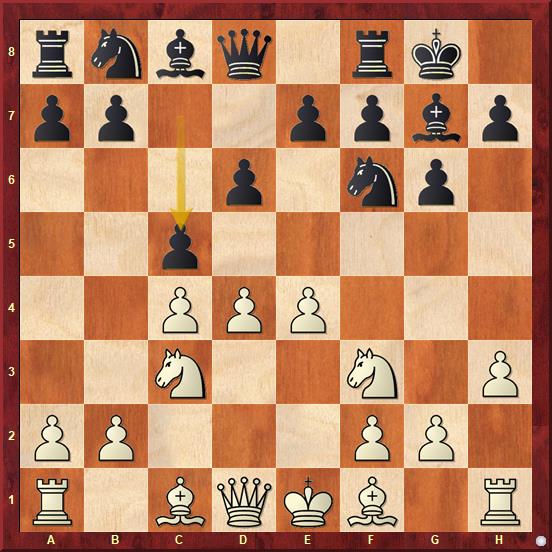 This is the other main way of attacking White's center. But in the resulting structures, h2-h3 proves useful. 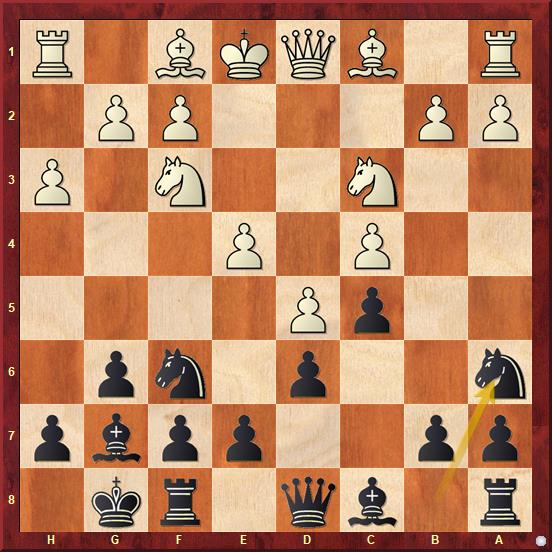 Black prepares the queenside break ...b7-b5 delaying the decision about where to advance the e-pawn. This is possible, but a rather slow plan.

A continuation in the spirit of the Volga/Benko Gambit.  Since White has not made important commitments (such as developing his queen's bishop far from the queenside) Black will mainly struggle for a draw, without clear chances to reach it.
White should continue 8.cxb5 a6 9.a4! with a clear advantage in all lines.

The most principled move, trying to reduce White's domination in the center and turning the game into a typical Benoni.
GM Mihail Marin suggests 8.Bd3 exd5 9.exd5! 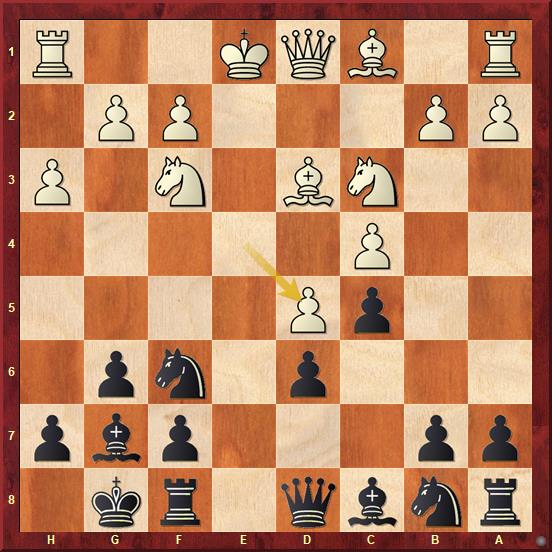 Of course, 9.cxd5 entering Modern Benoni is also possible, but this symmetrical structure is quite unpleasant for Black.
His main problem is the lack of space and counterplay. White can slowly improve his position, but it is hard to suggest a good plan for Black. Usually, he looks for chances in the position after 9...Re8 10.Be3 Bh6, but as the author proves White's position is preferable. At the last Chapter 15, GM Marin analyzes the only alternatives to the main lines having independent value.
We reach it after the moves 1.d4 Nf6 2.c4 g6 3.Nc3 Bg7 4.e4 d6 5.h3 0-0 6.Nf3 c6 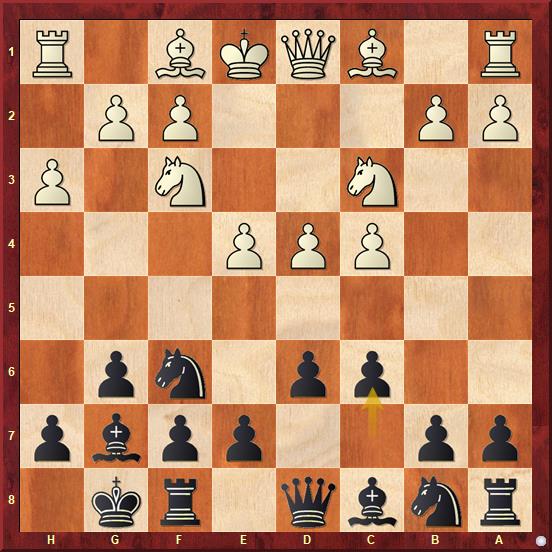 White has an upper-hand in all variations.

In this section, you will find 30 interactive exercises which are designed to test your positional and tactical understanding. Below, you can find 5 of them.