Systems with Bf4 and Sidelines

Welcome to the second and final database dedicated to Queen's Gambit Declined. In Part 1, I have dealt with all the systems based on Bg5. This database mostly features the lines in which White opts for Bf4 via different move orders. Of course, I deal with some sidelines as well. I tried to make a practical repertoire for Black. When possible, I suggest rare and relatively unexplored continuations. That being said, I have never opted for lines which are not justified from a positional point of view. The database includes three sections - Pawn structures, Theoretical Part, and Test Section.

The most recurring theme of this database is the so-called Carlsbad Structure. This structure will arise in all the lines in which White play cxd5 (if he does not take on d5, then we reach one of the structures dealt with in Part 1).

Introduction to the Carlsbad Structure

One of White's main plans in the Queen's Gambit is based on an early exchange on d5, reaching the so-called Carlsbad structure. This optimally happens before Bg5 or Bf4, as otherwise, as we can see in the theoretical databases, Black could answer cxd5 with ...Nxd5, taking advantage of the exposed position of the enemy bishop. Strictly speaking, cxd5 looks like a small concession, as it absolves Black from the worries regarding White's intentions in the centre, thus making his planning simpler, while also opening the h3-c8 diagonal for his bishop. But on the other hand, White also gets a very clear plan known as the minority's attack.

Mechanically, the effectiveness of this plan is easy to explain. Initially, Black has four pawns against three on the left half of the board. After b4-b5 and the inevitable exchange(s), the situation would change to 3 pawns versus 2 or more typically 2 (c7, d5) versus one (d4), meaning that Black would be left with permanent weaknesses. Black's kingside attacking plan usually takes longer to develop and is less one-sided, as the massive pawn advance would also weaken his king and possibly e5.

I should also add another important detail regarding the repertoire covered in the theoretical databases. With the move order recommended there, it is possible to reach the Carlsbad structure under two circumstances. Most typically, this happens after 1.d4 d5 2.c4 e6 3.Nc3 Be7 4. cxd5 exd5 5.Bf4, when Black manages to develop his potentially passive bishop with ...Bf5, usually resulting in its exchange after Bd3. This implies that White's control over c4 is weakened, making the advance of the b-pawn more problematic strategically. But on the other hand, Black's kingside attacking chances have also diminished, as his problematic bishop can often be useful to deliver strong blows, usually on h3. Another typical situation (not belonging to the absolute main lines, though) arises after 4.Nf3 Nf6 5.Bg5 h6 6.Bxf6 Bxf6 7.e3 0-0 8.cxd5 exd5. The exchange on f6 has absolved Black from his slight space problems and created some potential pressure in the centre. But in the absence of the knight f6 and with the bishop away from the h2-b8 diagonal, Black's attacking potential is once again smaller than in the usual lines arising after 3...Nf6 4.cxd5 exd5.

Taking all these into account, it is essential to know a few typical and effective ways to deal with the minority attack itself, even though sometimes the kingside counterattack is possible. Placing a knight on b6 anticipates the pawn break with maximum economy of forces. The typical continuation is 1.b5 (In such positions engines are enthusiastic about 1.a5, but this completely deprives White of constructive plans, leaving Black free hands to prepare his kingside play.) 1...cxb5 (With a bishop on f6, another effective answer is 1...axb5 2.axb5 c5). Apart from undermining d4, Black stabilizes his knight as a safe defender of the Isolani.) 2.axb5 a5 If Black manages to defend d5 properly (the knight does an excellent job, actually), the a-pawn could cause White many problems, especially in the endgame. Another possible plan is to consolidate the control over c4 with ...b7-b5. The success of this operation greatly depends on whether Black succeeds in playing ...a6-a5 followed by either ...a5-a4 or ...axb4. This would turn the a3- or b4 pawns into permanent weaknesses. If White is quicker in advancing his pawn to a5, then a6 would be a chronic weakness, especially dangerous for Black in the endgame.

All these ideas and much more are illustrated in 2 annotated games and 5 practical examples. In the late seventies and early eighties, Kortschnoj was one of the few pioneers trying to create problems in this system for Black, mainly in his matches with Karpov. Nowadays, this line is not a bit less important than 5. Bg5. On f4, the bishop does not put immediate pressure on Black's centre (in other words, it does not undermine his control on d5). but since this is an open invitation for Black to play an early ...c7-c5, the bishop is likely to restrict Black's mobility by controlling a few important squares along the h2-b8 diagonal. 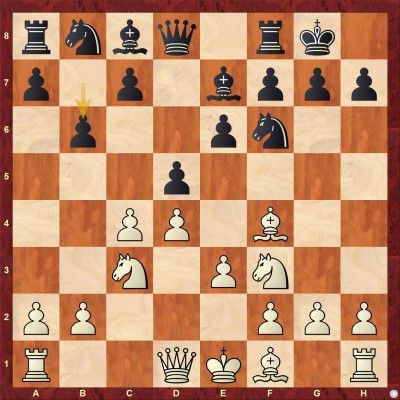 This is far from the most popular move, but not really a rarity either. After comparing to the main lines 6...c5 and 6...Nbd7, where the play usually flows along extensively analyzed lines and Black is close to equality but still struggling a bit, I have come to the conclusion that we do not need to deviate from our usual Tartakower setup. This system not only has a strong resemblance with the main Tartakower lines but is also flexible enough to avoid falling into the opponent's deep preparation. For this purpose, I have built up a repertoire offering Black a choice between three main structures against most of White's answers. Since 5.Bf4 is so popular nowadays, it makes sense to alternate those structures during a tournament. This is the first important crossroads in Chapter 1. In this chapter, I also deal with 7.Be2 and 7.Qc2.

After 7...exd5, we will examine a few essential aspects of this genuine Tartakower structure. The lines below may arise from different move orders, too, if Black meets a later cxd5 with ...exd5. The lines with ... exd5 are traditionally considered to put Black under pressure, but I have discovered that things are not one-sided and, at least as a reserve variation, it should work out well. 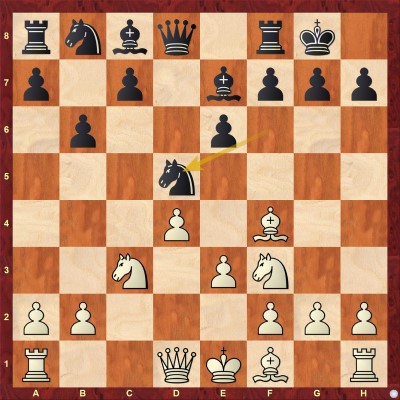 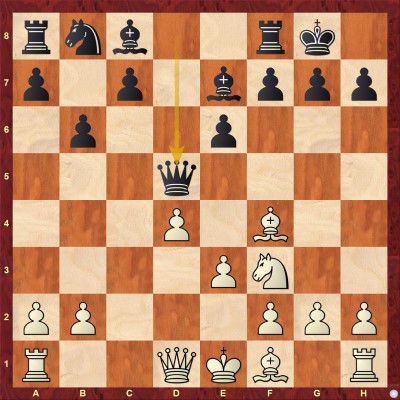 The most active continuation, implying a pawn sacrifice. This is the second typical structure in which Black occupies d5 with a piece. I deal with this extremely important position in four chapters - 2-5. White has several continuations - 9.Bxc7 (Chapter 2), 9.Bd3 (Chapter 3), 9.Be2 (Chapter 4), and 9.a3 (Chapter 5). My conclusion is that with a precise play, Black equalizes in all the lines. We have already seen this typical pawn structure in the previous database. Black is planning to expand on the queenside by means of ...c5-c4 followed by b6-b5-b4. White should decide whether to allow this idea or not. In this position, I deal with four continuations - 10.Ne5, 10.Qc2, 10.dxc5 and 10.0-0. The first three moves are examined in Chapter 6, while 10.0-0 is dealt with in Chapter 7. In the arising complicated positions, Black has every chance to even overtake the initiative. Also, objectively speaking, White does not find a way to prove an advantage. Black sacrifices the c7-pawn for the sake of the development. As I prove in my analysis, accepting the pawn with 10.Rxc7 could be dangerous only for White. Instead, White should go for 10.a3 which is a familiar move, which covers the e1-a5 diagonal. In this case, Black should keep playing energetically with 10...Nd7! Black keeps developing while preparing ...c7-c5 under favourable circumstances and inviting White to finally take the pawn. My analysis shows that Black has a comfortable position in all lines.

This chapter marks the beginning of a series of lines which can be classified as "The Exchange System" or else "The Carlsbad structure". The starting position of the Exchange System arises after 1.d4 d5 2.c4 e6 3.Nc3 Be7 4.cxd5 exd5 For White, it is optimal to develop his bishops on d3 and f4 or g5, but due to the move order based on 3...Be7, he cannot achieve that aim. In this position, White's main move 5.Bf4 is covered in the next chapters. In this chapter, I focus on the less threatening 5.Nf3. 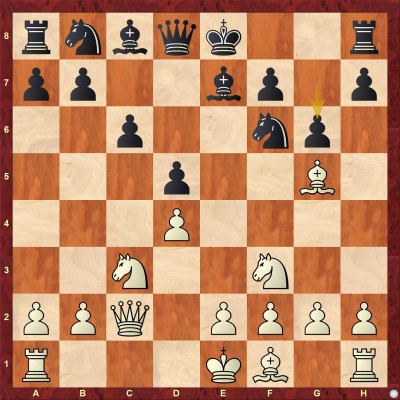 Black is preparing the thematic ...Bf5 which will probably lead to the exchange of the light-squared bishops. In this position, I analyze 8.Bxf6, 8.e3, and 8.e4. In my analysis, I demonstrate that Black is doing fine in these positions. This is the main line in the Carlsbad Structure with the given move order.
Black is on a crossroad here. The move 5…c6 is considered to be the most popular reply, but I suggest 5…Nf6 which is a logical move which keeps the option of playing ...c7-c5 in one move.
In this chapter, I deal with 6.Qc2 which is an early attempt to prevent Black from playing ...Bf5. Nevertheless, this move implies a strong commitment, allowing Black to start his counterplay in the centre by 6…c5! 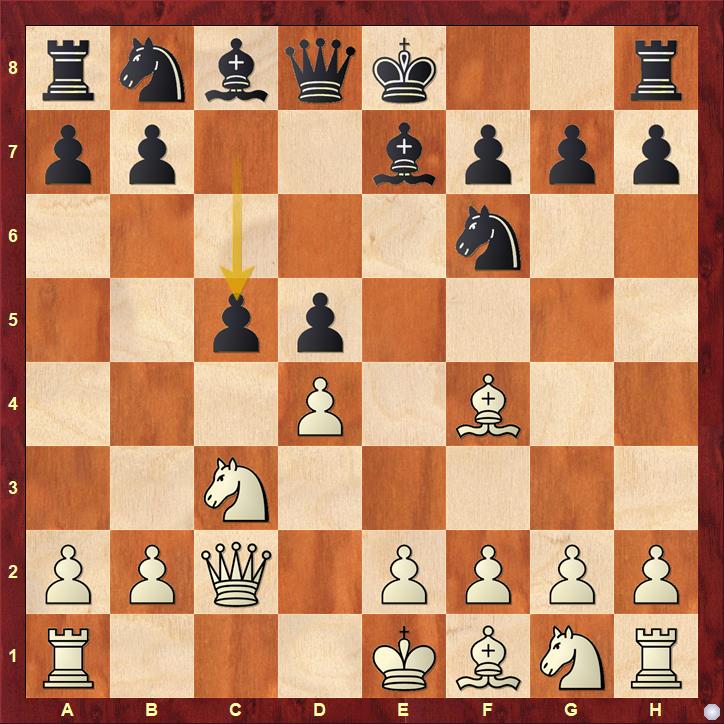 The arising positions are quite sharp but it seems that Black’s play is easier. This is by far the main line in Carlsbad Structure.
White has several ways to continue: 7.Nge2 (Chapter 12) and 7.Qb3 (chapters 13-16) are the main lines, but White also has some tricky alternatives.
In this chapter, I analyze the modest 7.Bd3 and the tricky 7.h3.
Both moves are playable but offer very little chances for White to fight for the advantage. The plan initiated by this move requires certain accuracy from Black. The most important nuance in my suggestion is that Black shouldn’t hurry with castling.
Instead, I opt for 7…c6 with idea 8.Ng3 Bg6 9.h4 h5! followed by Nbd7, Qb6 and 0-0-0.
The above-mentioned plan is very rare but positionally sound. I think that Black's chances are at least equal in the arising complicated middlegame positions. In the exchange variation, this is a typical reaction when Black plays ...Bf5 without ...c7-c6. The point is that he does not have ...Qb6.
This will be the subject of this and the next 3 chapters.
Black’s strongest reply is 7…Nc6 – a developing move, sacrificing the pawn on b7 for the initiative.
In this chapter, we will see the critical test for the whole variation - 8.Qxb7. After this move, the arising positions are very complicated. My opinion is that Black has enough compensation for the pawn. This move prevents ...Nb4 and aims at proving that the knight is not well placed on c6. But this is not the case he as the knight has quick access to c4.
Black should continue 8…Na5!. After castling, Black can start gaining space on the queenside by means of ...c7-c6 followed by ...b7-b5. The position is balanced. 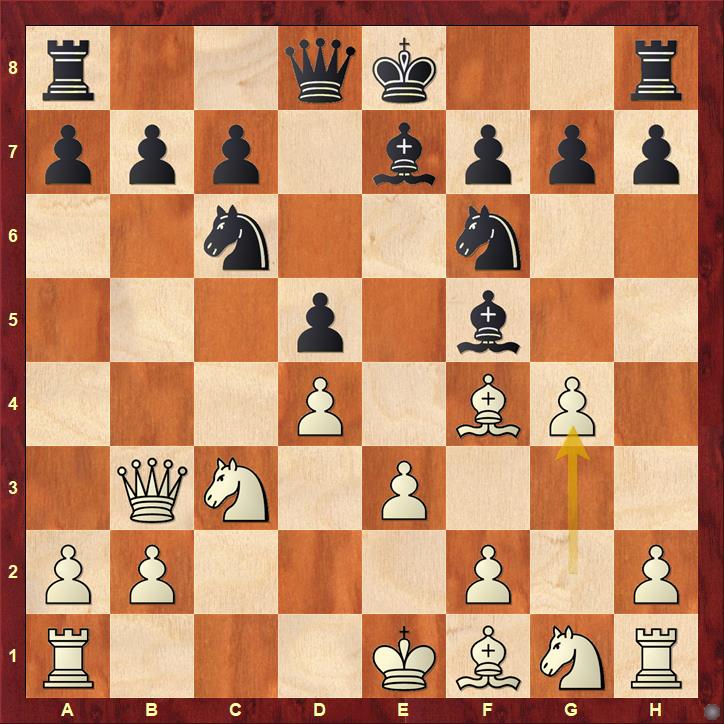 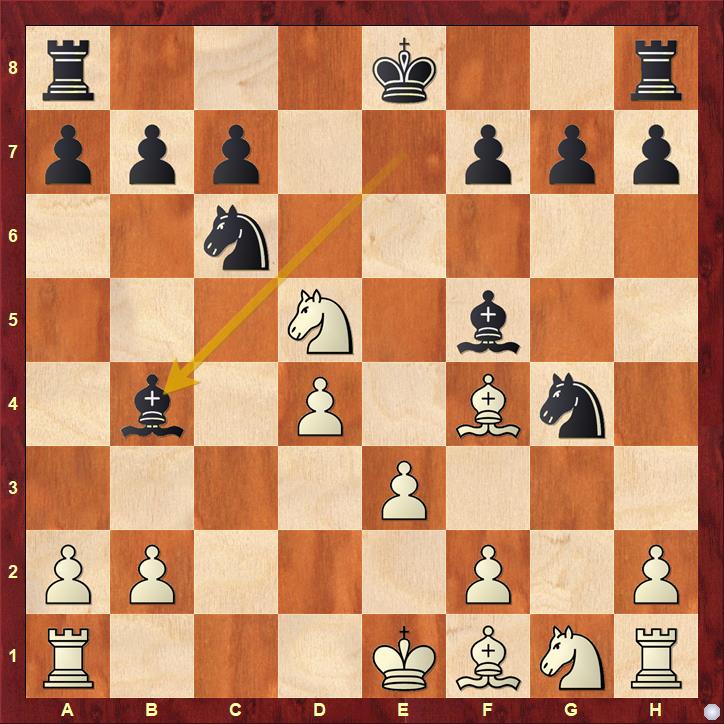 In this chapter, we will see 11.Nc3 which failed to pose serious problems for Black.
The main line 11.Nxb4 is the topic of chapter 16. we reach the starting position of my analysis.
In my opinion, Black’s better pawn structure and the control of the light squares provide enough compensation for White’s bishop pair. 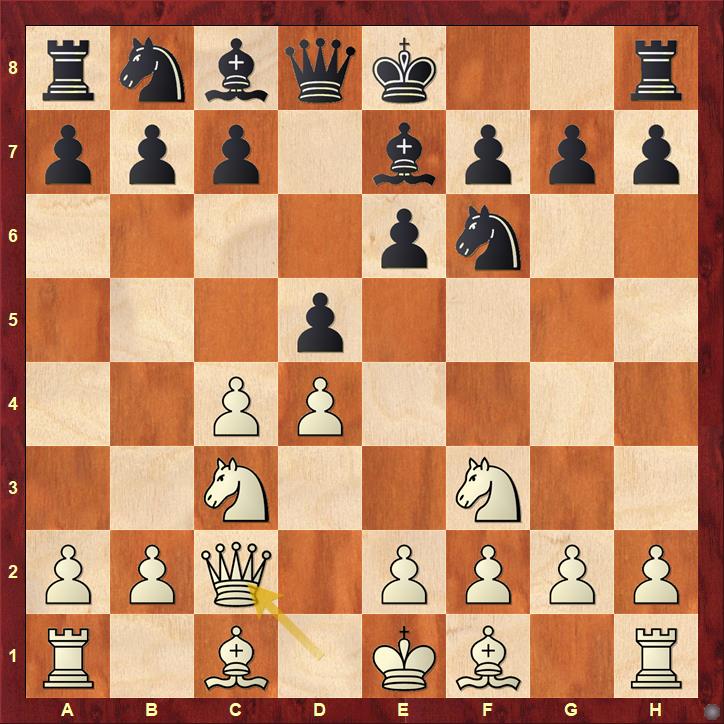 This is intended to be a subtle semi-waiting move. White takes the b1-h7 diagonal under control in advance, hoping to transpose to a normal Exchange variation. But the queen's early development weakens the control in the centre, allowing an immediate reaction. As the reader already knows from chapter 10, Black’s best reply to the early Qc2 is ...c7-c5.
The same strategy applies here as well. Black should continue 5…c5!
In this chapter, we will see the position after 6.cxd5
Black should continue cxd4! 7.Nxd4 0-0 with lead in development and serious counterplay. 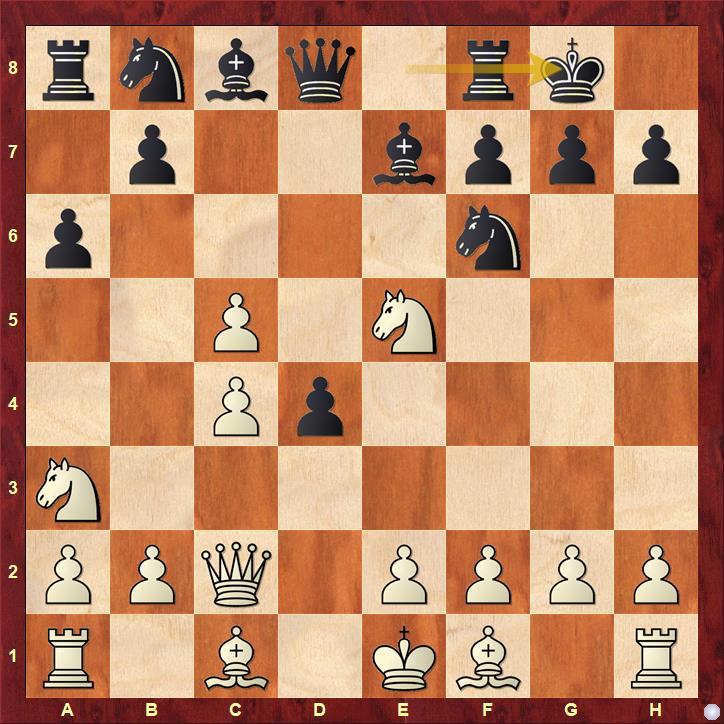 White's knight on a3 is passive and he needs a lot of time to complete his development.
According to the analysis, Black has more than enough compensation for the pawn.

In this section, you will find 20 interactive test positions which are designed to test and improve your understanding of the theory.