INTRODUCTION
Calculation, tactical vision, combinations, these closely related themes have since ever been the most popular chess books topic. This is easy to understand as opening books inevitably become outdated, endgame requires very accurate and painstaking analysis while teaching strategy on a systematic basis sounds very abstract. With such a quantity of (many of them excellent) books on tactics, one may ask himself whether anything new can be said on this subject. My feeling is that in many cases the system of classification used in such books fails to reveal some essential aspects. Sorting the examples according to the central theme of the combination (a system used on most occasions) is sound, but offers only an "outside image". And when trying to go deeper, my feeling is that there are books offering a very abstract, apparently logical explanation of the tactical events, but not necessarily one corresponding to the thinking process of the players.
In the current database, you will find 18 examples which are divided into 5 sections as well as 30 test positions which are divided into 6 sections. Every test position is backed up with extensive analysis and explanations that you can check after solving.
Let's take a look at the different sections of the database.
Tactics at the Service of Strategy
I regard chess as a game of global harmony, so making a difference between the different stages of the game or between tactics and strategy makes sense only for didactic reasons. In the opening, I mainly think of the middlegame's contours and in the middlegame, one of my main concerns is the type of ending I could land in. Tactics and strategy are also tightly connected and in a supposedly perfect game should go hand in hand. Here is one of my favorite examples of this kind, even though I was not the hero of the hand in hand approach.
Starting from the very first example, I will insert a diagram before each game, featuring a critical moment of it. Before you go through the annotated game, it can be useful to think a few minutes (10 minutes is my suggestion) on the question asked on each such diagram. 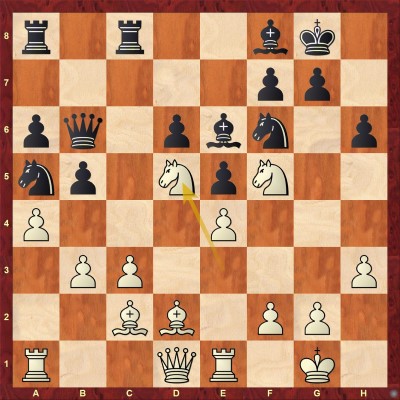 This position was reached in my game against Jakovenko played in 2007. With his last move 24.Nd5!, Jakovenko goes for a tactical conversion of his positional advantage. Can Black afford himself to take the knight?

The difficulties implied by the calculating process can be of different nature. There is certain fascination provoked by long combinations but if there are no major alternatives to the main line a strong player should have no problems calculating ten or more moves ahead. Things are of course by far more difficult if the opponent has choices, be it in the beginning, at a later stage, or all over the combination, even if the main thematic line lasts for only, say, four moves. Or else, the calculation may prove uneasy if the main line implies quiet moves (without check or piece capture).

Depending on the complexity degree of the calculating tree, the intuition should also be involved. There are positions where analyzing everything is possible only in correspondence chess or during the home preparation. It is always useful to have some safety nets on the way, such as the possibility of delivering a perpetual check or retrieving the sacrificed material with approximate equality. This would make one more confident when starting the combination, as an initial miscalculation would remain unpunished if noticed while the game advances.

In this section, I provide 4 extensively annotated games which illustrate the typical methods of calculating long variations.

There are two typical psychological mistakes when calculating a long branchless line:

1) you know it could be good but do not have the courage to go for it and then you start looking for the opponent's defenses too obstinately. This could result in seeing ghosts and convince yourself that "it does not work".

2) you lose objectivity and wish from all your heart that the line worked for you, failing to notice the opponent's defensive resources.

As we see, these are two opposite cases and there is no simple advice to avoid them. "Believe in yourself" would help to stay away from situation number one, but it faces you with the risk of falling into the second category, one while "Be circumspect, double and triple check" might achieve exactly the opposite.

The natural advice would be to keep a balance between looking for your and your opponent's resources, but this is only part of it. Once again, I would mention understanding and intuition. These refer to the evaluation of the starting position and the question whether everything is ripe for concrete, forcing action. Not least, safety nets should help one to embark the long lines. The worst that could happen in this case would be spoiling an advantage, but not losing.

In order to illustrate the psychological aspects of the calculation, I provide 3 classical games and 1 instructive study by Kasparian.

Ever since Kotov, much has been written about candidate moves. But I have always had the vague feeling that this is an attempt to make our game look scientific to an even higher degree than it is and that most of the players do not really think or calculate according to this pattern.

At least to me, the candidate moves theory means something a bit different. This is by far not the first time that I invoke the notion of "intuition". A strong player should feel what he should do in the critical positions and calculate just to check whether his idea is right. Here are a few typical situations.

1) The term "candidates" surely applies when it comes to the optimal move order of a certain forced variation or combination.

2) I must, however, admit that there are certain situations when intuition is not entirely reliable and one needs to check things concretely after the few moves available, when the method of elimination may save one from trouble.

3) There are also situations when one has to choose between a couple of what may seem equally good (or bad) continuations. In this case, it is essential to evaluate the resulting positions correctly, both objectively and from a practical point of view. The latter refers to turn play one-sided if he is better or, on the contrary, to keep chances for counterplay if the opposite applies.

All the abovementioned cases are illustrated in 3 examples (2 games and 1 study).

This is a very delicate subject. One may play a very good game, systematically outplaying his opponent by peaceful strategic means, but against a roughly equally strong opponent, it is rarely possible to win by this method alone.

There comes a moment when one feels that concrete, unusual action is required, but then you need to effectively "see" the starting move of the winning line, or even the whole idea. But switching from the "quiet" mode to the concrete one is not always easy psychologically. Sometimes the task is complicated by the opponent's confidence or even his bluffing. It can also happen in a different way. After defending an unpleasant position for a long time, one gets so used with this situation that could have problems spotting his opponent's blunders.

I should make an important remark. The terms of "vision" and blindness" refer to tactical ideas which are not known from the usual books with positions for solving. If a player does not find a combination based on a well-known theme it means that either his chess culture is not well developed enough or he simply forgot it due to tiredness and pressure. I know the feeling very well, it is something like a nightmare. "What if I will simply not see the winning idea?"

This subject is also illustrated in 4 highly instructive examples.

In this section, you will find 30 interactive test positions which are organized in 5 subsections - Long Variations, Candidate Moves, Unjustified Optimism, Missed Opportunities, Vision and Intuition, and Move Order and Commitment.

Below I provide you with 5 interactive tests concerning the calculation of long variations.